Atlantis, designation OV-104, was built by Rockwell International in Southern California. Atlantis was delivered to the John F. Kennedy Space Center in April 1985, and is the fourth-to-last shuttle ever built. The orbiter was named after the primary research vessel for the Woods Hole Oceanographic Institute, in Massachusetts. Her maiden flight launched October 3, 1985, and landed four days later at Edwards Air Force Base in California.

In June of 1995, Altantis was the first space shuttle to dock to the space station Mir. That same flight was the 100th flight of the space shuttle program. Overall, Atlantis flew seven missions to Mir.

In May of 2009, Atlantis carried a crew of seven astronauts to perform the fifth of five Hubble servicing missions.

Atlantis also participated in a number of International Space Station flights, delivering the American laboratory module Destiny, the Quest airlock, and sections of the truss that form the station's spine.

Atlantis launched on her final mission on July 8, 2011 with a crew of four astronauts.

From the Inside Out

"This image of Atlantis' payload bay, focusing on the docking mechanism, was photographed by the STS-135 crew from inside the crew cabin. The orbiter boom sensor system and a portion of the remote manipulator system's robot arm are visible in the frame, exposed during a busy third day in space for the astronauts. The photo was made shortly before the shuttle docked with the International Space Station." 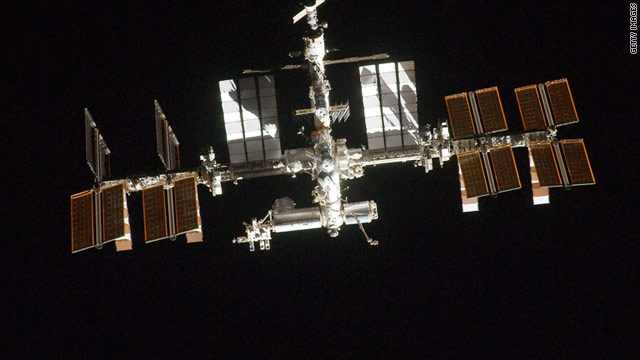 Two NASA flight engineers who have been aboard the International Space Station plan to conduct the last spacewalk of the space shuttle era Tuesday, the agency said.

Michael Fossum and Ronald Garan had been at the International Space Station for several weeks before the crew from Atlantis arrived Monday. Members of the Atlantis crew will help choreograph the spacewalk from inside the space station, but only Fossum and Garan are scheduled to venture outside.