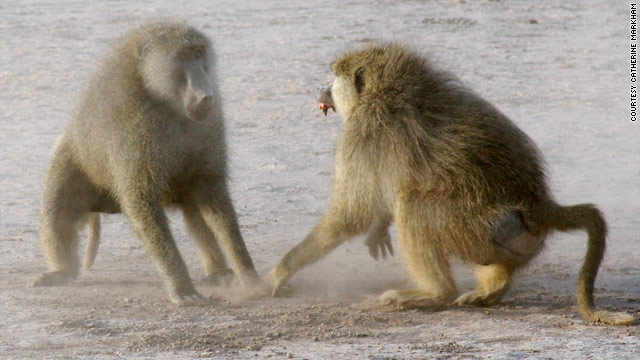 It's not easy being at the top. In the savannah baboon world, it seems that alpha males - those who have the highest status - are also stressed out, according to a new study in the journal Science.

And, stress can lead to negative health outcomes in primates, including humans, prior research has shown.

Among these baboons, alpha males have preferential access to food resources and to mates. If there's one fertile female in a group, the alpha male will mate with her.

So what is there to be stressed about?

It seems that alpha males have higher rates of fighting and courtship behaviors than the second-ranking "beta" males, said Laurence Gesquiere, researcher at Princeton University and study co-author. Both of these activities cost valuable energy, and could explain why their stress hormone levels are higher.

Courting a mate is serious business for an alpha male baboons.

"When female is fertile, the alpha male follows her everywhere. He's not eating as much as he should, because he's busy keeping an eye on her and following her," she said. "He has to push away all the other males who are going to try to mate with her.

Gesquiere and colleagues also looked at whether alpha males get groomed less by females, but that was not the case, either. Grooming has been shown to be a good coping mechanism for stress, but alpha and beta males seemed to receive about the same amount of grooming.

And although the study did not look at strictly psychological factors, they could also play a role, she said.

"They could also be stressed about losing their rank. Now that they are alpha, they can only go down," she said.

Followup studies might look at the health and survival of the alpha male, since elevated testosterone levels (observed among all high-ranking males) and stress hormone levels might reduce the baboons' lifespan.

It would also be interesting to see if female baboon stress levels correlate with their rank. Male baboons are at the top of the social hierarchy when they are between 8 and 10 years old, and then their status decreases with age. Females, on the other hand, they inherit a rank through their mother and stay the same; they hardly ever get challenged by other females for status.

And this research also points to avenues of research into stress in relation to human socioeconomic status or other kinds of ranks - for instance, the CEO vs. lower ranking employees in a company.

"I think it would be important in the future to try to look at stress hormone levels in humans, and really look at costs and benefits on different positions in the hierarchy," she said.