(CNN) - The largest population of a "critically-endangered" gibbon species has been discovered in Vietnam, according to a leading conservation group.

A new census of the northern white-cheeked crested gibbon by Conservation International (CI) scientists has found a population of 455 - living in 130 groups - in Pu Mat National Park, in the north of the country.

The discovery represents over two-thirds of the total number of the species left in Vietnam, and is the "only confirmed viable-population of this species left worldwide," according to CI.

Russell A. Mittermeier, president of Conservation International says all of the world's 25 different gibbon species are under threat from extinction, but none more so than the white-cheeked gibbon.

"This is an extraordinarily significant find, and underscores the immense importance of protected areas in providing the last refuges for the region's decimated wildlife," Mittermeier said in a statement.

Europe's plans for the future of space travel

London (CNN) – As the United States puts its Space Shuttle programme to bed with one last blast off, Europe is putting more emphasis on exploiting what we already know about space and the technology that has been developed.

At last week’s UK Space Conference in Coventry, lectures focused on increasing investment in telecommunications and navigation systems, where the European space industry now has 40% of the worldwide commercial market.

"We have more ideas than money available, this is for sure,” said Jean Jacques Dordain, Director General of the European Space Agency. “There is an increase in investment in Europe.”

In Europe, he continued, “we are putting much more priority on knowledge and services to the citizens than exploration. But exploration is the dream part of space activities.”

On Feb. 20, 1962 at 9:47 am EST, Glenn launched from Cape Canaveral's Launch Complex 14 to become the first American to orbit the Earth. In this image, Glenn enters his Friendship 7 capsule with assistance from technicians to begin his historic flight.

Before joining NASA, Glenn already had a distinguished career as a pilot, receiving the Distinguished Flying Cross, Navy Unit Commendation for service in Korea, the World War II Victory Medal, the Navy's Astronaut Wings, the NASA Distinguished Service Medal, among others.

Glenn rejoined NASA in 1998 as a member of the STS-95 Discovery crew. This 9-day mission, from Oct. 29-Nov. 7, supported a variety of research payloads including deployment of the Hubble Space Telescope Orbital Systems Test Platform and investigations on space flight and the aging process." 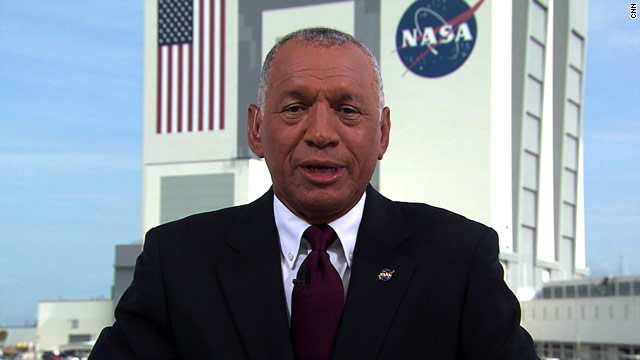 NASA head: "This isn't the end for the workforce here"

Editor's note: John Zarrella  is a principal correspondent for CNN's coverage of the U.S. space program, covering such events such as John Glenn's 1998 return to space, the Mars Pathfinder mission and numerous space shuttle launches.

When the Space Shuttle Atlantis touches down at the Kennedy Space Center, it will be a satisfying moment for NASA’s top man Charlie Bolden, himself a former shuttle astronaut.

“That will signal that we have completed what I set out to do with shuttle when I became NASA Administrator, safely flying out the shuttle program” Bolden said.

During an exclusive interview at the Florida launch complex just days after the Atlantis launch, Bolden discussed a wide range of issues facing the U.S. Space Agency, not the least of which is the loss of a highly skilled workforce.

“I’d like to talk to people from Silicon Valley to get them to come here”, Bolden said. “This is an incredibly rich area of the country and I think people are missing the boat here.  They’re missing out on the most talented workforce in the world. I have people here who can do anything.”

They may be able to do anything but most won’t doing what love, very much longer.

A day after Atlantis, the last shuttle to fly, comes home, more than two thousand workers at Kennedy will be laid off, joining thousands of others who have already gotten pink slips.

“This is not the end for the workforce here. We’re transitioning them,” Bolden insists, “We have spent six, seven years developing and conducting a very, very well thought out very rigorous transition program, plan to get from shuttle to the next program.”

The next NASA program is however years away.  The space agency is developing a new heavy lift rocket and capsule that will take humans first to an asteroid and then to Mars. But, the first test flight won’t be before 2016.

The NASA Administrator says, “The future for America and our partners is beyond low earth orbit.  It’s beyond the moon.  It’s back to the moon when we have to but to an asteroid in 2025; to Mars in 2030.  Those are achievable goals.   Congress has got to help us there.  The American public has got to continue to give us the support.”

Right now Congress is not in a giving mood and has apparently lost its patience with NASA over on very big ticket item. The latest space telescope is now under a congressional microscope.

The James Webb telescope was supposed to be the next generation Hubble and was already supposed to be in space.  It was supposed to cost less than two billion dollars.  Now, the price tag is up to around seven billion and it won’t be ready to fly for at least another four years at best.

Bolden says it would be a terrible loss to science if Webb is cancelled.  He insists NASA is now on the right track with Webb but he understands the telescope is on shaky ground.

“We will do what the congress dictates.  I’m very hopeful we can convince them of the importance of James Webb and we can get their support for funding for it.”  Bolden added, “It’s very difficult times right now fiscally.  The nation has to decide what’s important to us.”

The space agency has come under continued fire as an agency with no goal once shuttle stops flying.  That couldn’t be further from the truth, Bolden bristles.

“President Obama has given us an incredible opportunity to hit the restart button.  For the first time ever, we are now looking at going back to where we were in the late 1970’s, early 1980’s, looking at an exploration program where we take humans beyond where we’ve been before, beyond the moon to an asteroid as the president has directed.  He’s thrown down the gauntlet and I’m picking it up.” 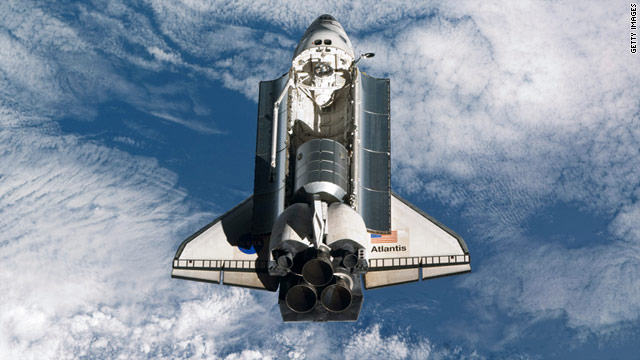 Hello, space and science fans! There's lots of great stuff to catch up on and watch out for this week:

–The Dawn spacecraft, a NASA probe with no humans aboard, entered orbit around the asteroid Vesta on Saturday, 117 million miles from us. It is the first spacecraft to enter orbit around an asteroid belt in our solar system, Scientific American reports. "The pictures and data Dawn returns may never dazzle the public the way the Hubble Telescope's great portraits of the cosmos have. We'll have to settle instead for learning a lot more than we ever knew before about the origins of our solar system — and thus of ourselves," writes Time's Jeffrey Kluger.

END_OF_DOCUMENT_TOKEN_TO_BE_REPLACED

Today is John Glenn’s 90th birthday. Glenn's many accomplishments include being the first American to orbit the earth, a decorated Marine Corps veteran and a United States senator. To celebrate his birthday, Life.com published previously never-before-seen photos of Glenn during the Space Race.