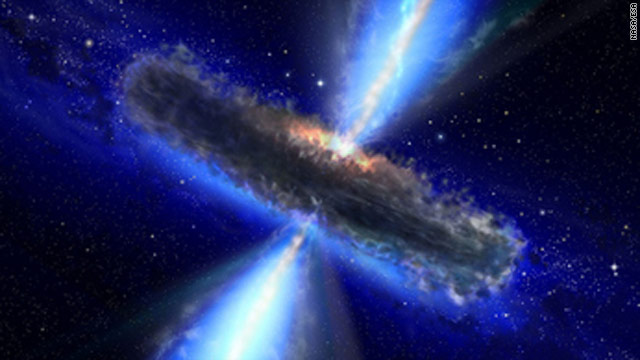 Is there water in space? Well, 12 billion years ago there was a lot of it, astronomers say.

A team of international scientists analyzing a quasar 12 billion light-years from Earth say there is water vapor in the object - which they call "a voraciously feeding black hole" - equivalent to 34 billion times the mass of our planet. They say it's the largest mass of water ever found.

"We not only detected water in the farthest reaches of the universe, but enough to fill Earth's oceans more than 100 trillion times," said Jason Glenn, an associate professor at the University of Colorado-Boulder, who was co-author of a study of the quasar.

In our galaxy, the Milky Way, there is 4,000 times less water than in the quasar, and it is spread over a few light-years, according to the study. But in the quasar, the water vapor is present over hundreds of light-years, they said. A light-year is about 6 trillion miles.

The discovery was made using a spectrograph at the California Institute of Technology's telescope on the Mauna Kea volcano on Hawaii's Big Island and verified using a facility in California's Inyo Mountains.