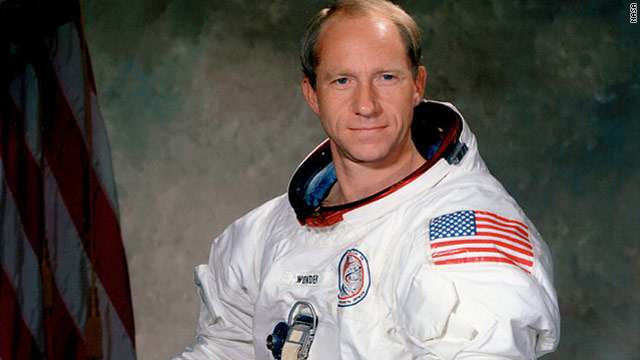 Although Apollo 15 astronaut Al Worden still feels that NASA treated him unfairly 40 years ago, he says he's now "back on par" with the space agency on this anniversary of his journey to the moon in July 1971.

Many have forgotten the so-called "covers" incident, which prompted many Americans to question the Apollo astronauts’ almost god-like status as national heroes.

"What has happened to the astronauts?" asked a New York Times headline at the time.

Worden, now 79, and his Apollo 15 crewmates David Scott and James Irwin suffered stinging NASA reprimands for bringing with them into space about 400 unauthorized postage-stamped envelopes (called first-day covers) with the intention of selling them later as souvenirs.

"It wasn't as bad as people thought. We didn't violate any regulations, we broke no rules," Worden said Tuesday from his home in Vero Beach, Florida.

An investigation into the incident revealed that previous Apollo astronauts had carried unauthorized memorabilia on board. But Worden and his fellow crew members bore the brunt of the backlash.

NASA "was very quick to throw us under the bus," said Worden. "They made an example of us."

Worden, an Air Force colonel, was dropped from the astronaut corps and reassigned to a NASA desk job - never to fly in space again. NASA's astronaut manager, Deke Slayton, called Worden on the phone to deliver the bad news.

"'The Air Force wants you back, that’s the good news,” Worden remembers Slayton telling him. “'The bad news is, you've got to be out of your office by next Monday.'"

NASA initially refused to return the envelopes to the astronauts, prompting Worden to sue the space agency. The case was settled out of court and the crew members got their envelopes back. "Once we had exposed the fact that they had violated our constitutional rights, then the game was all over at that point," he said. "They took our property and kept it without due process."

Worden and his colleagues changed their minds and chose not to accept thousands of dollars they had agreed to be paid for the souvenirs from a West German stamp dealer. But Worden did sell some of the envelopes years later, he said, to pay for campaign debts he incurred when he ran unsuccessfully for Congress in the '80s.

"There probably are some things I would have done differently," Worden said Tuesday. "I probably wouldn't have been so naive when this whole thing was offered to us."

He said he and the other crew members were told that every Apollo crew had done the same thing.

"As a matter of fact, if you go on auction sites you'll see covers that were carried on Apollo 11 and all the other flights, and nobody ever made a fuss about them."

"I think everybody's forgotten about it ... and I'm sort of back on par with everybody." Lately Worden has been active at NASA functions and with the Astronaut Scholarship Foundation, which funds college educations for science and technology students.

The "covers" controversy overshadowed Apollo 15’s successful and historic moon mission, which accomplished several firsts, including the first lunar rover vehicle and the first walk in deep space. Worden, who took that walk, remembers what it was like being suspended in space a record-setting 196,000 miles from Earth.

"The real difference is the view,” he said. “You can see both the Earth and the moon, which is a pretty unique position."

The crew overcame its share of mission glitches, including a loose umbilical plug between the lunar module and the command module, a water leak inside the astronaut cabin, and a failed parachute during re-entry to the Earth's atmosphere.

Worden describes more about going to the moon and his fascinating career in his newly published autobiography, "Falling to Earth."