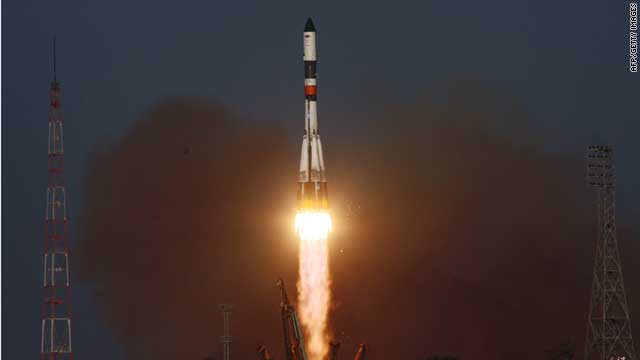 Space station may be left unmanned because of Russian rocket problem

Moscow (CNN) - The Russian space agency on Monday postponed the launch of a new manned mission to the International Space Station due to last week's accident in which an unmanned cargo craft was lost, the state news agency RIA Novosti reported.

Alexei Krasnov of the space agency, Roscosmos, said the next manned mission, originally planned to launch on September 22, now would occur in late October or early November, according to the RIA Novosti report.

In the United States, NASA's space station program manager told reporters Monday that the timing of the rescheduled mission could force the temporary de-manning of the space station later this year.

However, the NASA official, Mike Suffredini, said no decisions can be made until a commission appointed by Russia completes its investigation of the August 24 crash involving a Soyuz rocket - the same kind used to power the flights of crew members to the space station.

With a planned rotation of the six crew members aboard the space station scheduled to begin next month, a delay in using the Soyuz could prevent the ability to bring replacements, Suffredini said.

"If we don't have Soyuz flying by the middle of November - the 16th or so, the normal landing time for the last crew - we would have to de-man ISS at that point," Suffredini said.

The six astronauts at the space station are three from Russia, two from the United States and one from Japan.

"Technicians position microphones around the Orion MPCV, or Multi-Purpose Crew Vehicle, and LAS, or Launch Abort System, test craft in preparation for the second round of testing in the acoustic chamber at Lockheed Martin’s facilities near Denver in late August 2011. The vehicle was bombarded by acoustic levels of 150 decibels to simulate conditions during launch and abort, if necessary."

Today, @CNNLightYears is giving a #FollowFriday to Twitter accounts you can follow for updates on Hurricane Irene. You can track Irene on CNN.com.

END_OF_DOCUMENT_TOKEN_TO_BE_REPLACED

GOES-13 captures Hurricane Irene on the morning of August 25. The storm is now measured to be approximately one-third the size of the east coast of the United States.

A Tale of Three Galaxies

"Arp 274, also known as NGC 5679, is a system of three galaxies that appear to be partially overlapping in the image, although they may be at somewhat different distances. The spiral shapes of two of these galaxies appear mostly intact. The third galaxy (to the far left) is more compact, but shows evidence of star formation.

Two of the three galaxies are forming new stars at a high rate. This is evident in the bright blue knots of star formation that are strung along the arms of the galaxy on the right and along the small galaxy on the left.

The largest component is located in the middle of the three. It appears as a spiral galaxy, which may be barred. The entire system resides at about 400 million light-years away from Earth in the constellation Virgo.

Hubble’s Wide Field Planetary Camera 2 was used to image Arp 274 in april 2011. Blue, visible and infrared filters were combined with a filter that isolates hydrogen emission. The colors in this image reflect the intrinsic color of the different stellar populations that make up the galaxies. Yellowish older stars can be seen in the central bulge of each galaxy. A bright central cluster of stars pinpoint each nucleus. Younger blue stars trace the spiral arms, along with pinkish nebulae that are illuminated by new star formation. Interstellar dust is silhouetted against the starry population. A pair of foreground stars inside our own Milky Way are at far right."

Hurricane Irene over the Bahamas

This image, captured by NASA's Terra satellite, shows Hurricane Irene over the Bahamas at 11:05 a.m. EDT on August 24.

The coolest star-like bodies yet

NASA's WISE (Wide-field Infrared Survey Explorer) mission has discovered the coolest star-like objects yet - literally. Dubbed "Y dwarfs," these celestial bodies have temperatures that can be as cool as that of a human body. The coldest one discovered so far has a temperature of less than 80 degrees Fahrenheit.

Y dwarfs are technically a subclass of the brown dwarf category and are nearly impossible to see with visible-light telescopes.

WISE uses infrared, allowing astronomers to confirm the Y dwarfs' existence after 10 years of looking. The telescope spotted six of the dark objects within a distance of 40 light-years of our sun.

Brown dwarfs are sometimes referred to as failed stars, because they start out like stars but never accumulate enough mass at their cores to start the reactions that allow them to shine. Instead, they cool off over time and give off most of their light in infrared wavelengths.

The study of brown dwarfs helps astronomers understand how stars form and tells them more about the atmospheres of planets outside our solar system. Brown dwarfs have atmospheres similar to those of gas giant planets, but they are easier to observe because they're away from the light of a brighter star.

WISE data has exposed 100 new brown dwarfs so far, six of which are classified as Y dwarfs. Scientists expect more discoveries as they continue to examine the data coming in from the telescope.