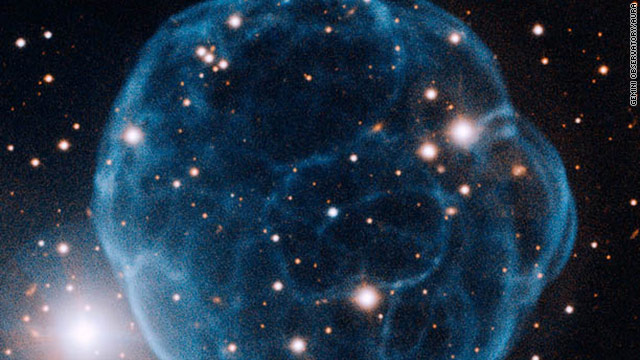 Welcome to August, and to your weekly roundup of great reads in the science and space fields:

–If you like space photography, you may be familiar with planetary nebulae, which are large clouds of gas that are roughly spherical in shape. The one that's making headlines now is the newly identified Kronberger 61. Not only is it nice to look at, with its almost-soccer-ball quality, but it's also in the region of study of the Kepler probe, which may find insights into how such planetary nebulae form in the first place, Time reports.

–Fashionistas, prepared to be amazed by insects called treehoppers, which wear intricate "helmets" that mimic other natural phenomena and may help amplify sound. Some helmets resemble aggressive ants; others, caterpillar droppings or thorns. New Scientist has more on these tricky creatures.

–Humans' first contact with "alien life" might happen right here on Earth, in a laboratory. Scientists are working on engineering synthetic life, starting from the fundamental building blocks of DNA and RNA, which encode genetic information. The New York Times has the story.

–The sun's corona, a sort of plasma atmosphere visible to Earthly observers during a solar eclipse, is very hot. In fact, it's 20 times hotter than the surface of the sun. That's odd, since you'd think that temperatures would be cooler further away from the sun itself. A study in the journal Nature suggests that large magnetic waves might be the culprit. Discover has details.

–Here's a complex idea to wrap your brain around: The space of the universe is not flat, but curved. Scientific American explains this concept with a little math and historical context.