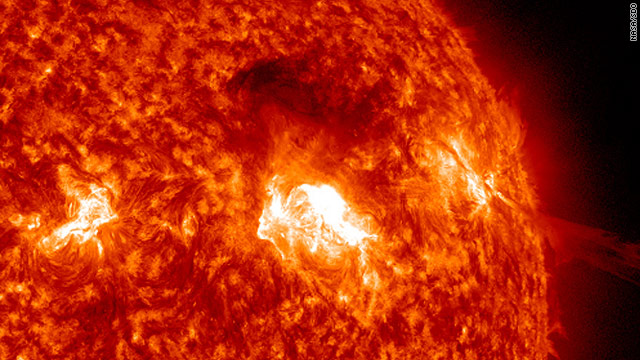 The National Oceanic and Atmospheric Administration (NOAA) is keeping an eye on a set of solar storms and explosions that could disrupt satellite, telecommunications and electric equipment here on Earth in the next few days.

While activity had reportedly returned to somewhat normal levels when solar winds calmed Monday morning, another explosion Tuesday was three times larger than the February 15 flare, which, until now, was the most significant flare of this solar cycle.

Solar flare may disrupt your GPS

The real forecast worth taking a look at, however, is the one for 2013, when solar activity levels are expected to peak with the next "solar maximum" within the 11-year activity cycle. Electric and magnetic interference from solar storms blasting electrically charged particles into the Earth’s magnetic field can cause major interferences on earth. Already this year, there have been reports of lost high-frequency radio communication with aircraft near the Arctic, along flight paths where pilots depend on such communication for flight safety and guidance.

END_OF_DOCUMENT_TOKEN_TO_BE_REPLACED

Opportunity's View of the Rim of Endeavour

"NASA's Mars Exploration Rover Opportunity used its panoramic camera to capture this view of Endeavour Crater's rim after a drive during the rover's 2,676th Martian day, or sol, of working on Mars (Aug. 4, 2011). The drive covered 396 feet (120.7 meters) and put the rover with about that much distance to go before reaching the chosen arrival site at the rim, called 'Spirit Point.'

Endeavour Crater has been the rover team's destination for Opportunity since the rover finished exploring Victoria crater in August 2008. Endeavour, with a diameter of about 14 miles (22 kilometers), offers access to older geological deposits than any Opportunity has seen before. This view looks toward a portion of the rim south of Spirit Point, including terrain that Opportunity may explore in the future."