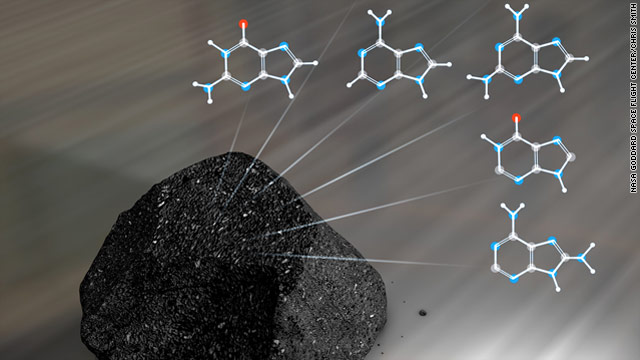 NASA researchers have found the building blocks of DNA, the genetic molecule that is essential to all life forms, in meteorites, pieces of space rock that have fallen to Earth. The discovery suggests that similar meteorites and comets may have impacted Earth and assisted in life formation here.

With minimal chance for contamination of the meteorite samples, scientists are confident that these meteorite specimens were formed in space. “People have been discovering components of DNA in meteorites since the 1960's, but researchers were unsure whether they were really created in space or if instead they came from contamination by terrestrial life,” Michael Callahan, lead author of the study on the discovery, said in a statement.

The research team analyzed twelve carbon rich meteorites, nine of which were from Antarctica, to positively identify the basic elements of the chemical compounds they extracted from the samples. Testing revealed adenine and guanine, two fundamental components of DNA called nucleobases.

DNA is shaped like a double helix, or twisted ladder, and the rungs of that ladder are each comprised of two nucleobases, either a pairing of adenine and thymine or of guanine and cytosine. The ladder is essentially a long string of genetic code that tells cells in an organism which proteins to make. Those proteins then play critical roles in organism growth and function, making everything from hair to enzymes.

The meteorites also contained trace amounts of three molecules associated with nucleobases, called nucleobase analogs, but two of those are almost never seen in biology, providing the necessary proof that these DNA components were actually created in outer space.

In fact the only record of any of these nucleobases in biologic processes is within a virus.  Callahan said in the NASA press release that “if asteroids are behaving like chemical 'factories' cranking out prebiotic material, you would expect them to produce many variants of nucleobases, not just the biological ones, due to the wide variety of ingredients and conditions in each asteroid,” and that is exactly what these researchers found. He says the nucleobases found, biological or not, can also be created in a lab setting, using the basic compounds hydrogen cyanide, ammonia, and water.

This finding contributes further to the growing collection of evidence that asteroids and comets are comprised of the proper chemicals to generate the building blocks of life. Some seem to have the ideal internal chemistry for the job.

“In fact, there seems to be a ‘goldilocks’ class of meteorites,” Callahan said in a statement, “the so called CM2 meteorites, where conditions are just right to make more of these molecules.”