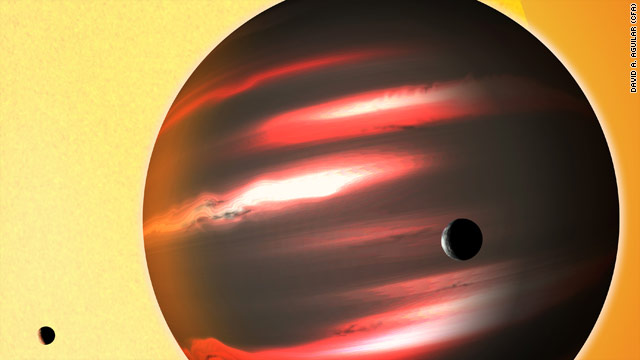 The darkest world known to man

Astronomers say they've uncovered the darkest world ever, a planet blacker than coal that absorbs 99% of the light its star sends its way.

TrES-2b is a Jupiter-sized gas giant orbiting a star 750 light years from Earth in the direction of the constellation Draco.

Astronomers found out the dark truth about TrES-2b using data from NASA's Kepler spacecraft, a satellite telescope to survey our Milky Way galaxy in search of Earth-like planets.

TrES-2b won't fall into that category, however.

"TrES-2b is considerably less reflective than black acrylic paint, so it's truly an alien world," astronomer David Kipping of the Harvard-Smithsonian Center for Astrophysics said in a press release. He is the lead author of a research paper on the dark planet submitted to the Monthly Notices of the Royal Astronomical Society.

Kipping and co-author David Spiegel of Princeton University say TrES-2b is a scalding world, with a temperature of about 1,800 degrees Fahrenheit. Its atmosphere probably contains vaporized sodium and potassium, or gaseous titanium oxide, all substances that absorb light but wouldn't alone account for the planet's darkness.

"It's not clear what is responsible for making this planet so extraordinarily dark," Spiegel said in a press release. "However, it's not completely pitch black. It's so hot that it emits a faint red glow, much like a burning ember or the coils on an electric stove."

TrES-2b revealed itself when as its orbit took it between Kepler and its star, changing the amount of light coming from the star ever so slightly.

"By combining the impressive precision from Kepler with observations of over 50 orbits, we detected the smallest-ever change in brightness from an exoplanet: just 6 parts per million," Kipping said in the press release. "In other words, Kepler was able to directly detect visible light coming from the planet itself."