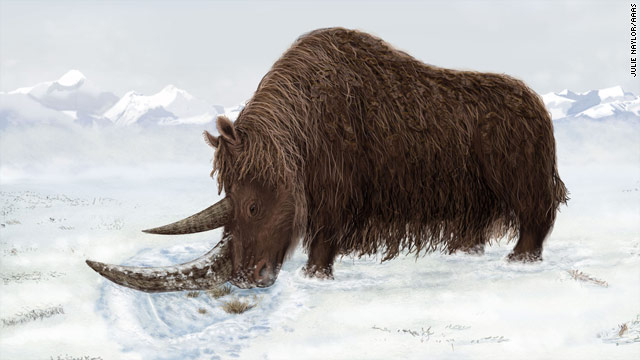 The woolly rhino may have once roamed foothills of the Himalayas in southwestern Tibet.
September 1st, 2011
03:32 PM ET

Ice Age giants may have evolved in Tibet

Researchers have found the earliest known fossil of a primitive woolly rhino in the Himalayas, in addition to many other remains of animals that no longer exist. This may mean that some giant mammals first evolved in what is now Tibet before the Ice Age began about 2.6 million years ago.

"This is the new frontier for discovery in science. We can expect to have a lot of new discoveries as we keep exploring the Tibetan plateau," said Xiaoming Wang from the Natural History Museum of Los Angeles County, who led the team and discovered the woolly rhino skull.

The woolly rhino had a horn that is flattened a little bit; more like a paddle than a stick, allowing it to more easily scoop up snow and uncover vegetation, Wang said. It was roughly the size of the modern black rhino of Africa, which may weigh 1.2 tons to 1.6 tons.

At the time the animal lived, the researchers found, the earliest human ancestors hadn't left Africa. The descendants of both of those species did meet, however, millions of years later in the late Ice Age. In fact, there are cave paintings depicting woolly rhinos.

But no one knows why the woolly rhino had gone extinct by the end of the Ice Age, which was about 10,000 years ago. There's no evidence of overhunting by humans, Wang said.

Wang's team found other fossils of curious extinct animals, including a three-toed horse, a snow leopard and a badger, among more than two dozen others.