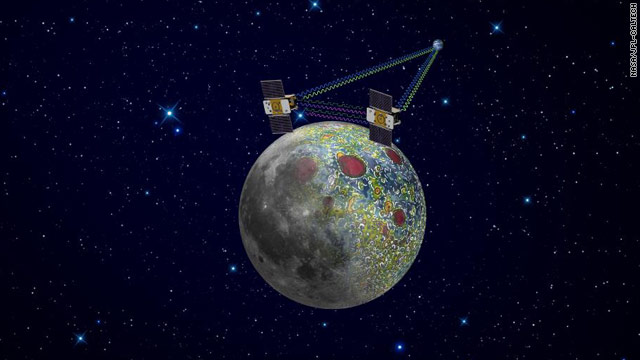 The twin GRAIL spacecraft will map the moon's gravity field, as depicted in this artist's rendering, says NASA.
September 7th, 2011
09:24 AM ET

[Updated September 9, 10:02 am ET] GRAIL's launch has scrubbed a second time for high winds. The next opportunities for launch are Saturday: 8:29 or 9:08 am ET.

[Updated September 8, 9:26 am ET] GRAIL's launch has scrubbed for the day due to out-of-tolerance high-level wind conditions. NASA has two opportunities to launch on Friday: 8:33 or 9:12 am ET.

Change, big change is coming, says Maria Zuber. “I’m predicting that we’re gonna find something and I don’t know what it is,” says Zuber, “and it’s really gonna surprise us and turn our understanding of how the moon and other terrestrial planets formed on its ear”.

Zuber is the principal scientist for NASA’s GRAIL Mission to the moon. GRAIL is a space agency acronym for Gravity Recovery and Interior Laboratory. The mission is designed to try and figure out what the moon is made of. GRAIL has two chances to launch on Thursday from Cape Canaveral Air Force Station in Florida: 8:37 a.m. and 9:16 a.m. EDT.

The Apollo astronauts brought back more than eight hundred pounds of rock and soil. There have been more than one hundred unmanned missions to the moon. But none of these has answered the question of what’s below the surface.

“The part of lunar understanding we don’t have yet is what’s inside the moon. So to really understand what makes it special, we need to study what’s inside,” says Zuber.

Two probes, the size of washing machines, make up GRAIL.  After their launch, they will take a three month long, fuel-saving route to the moon. Once they arrive, the probes will dip down into orbit flying one behind the other about thirty-five miles above the lunar surface.

Because gravity is not uniform, the tug on the probes will vary as they fly over differing lunar features: mountains, valleys or masses hidden below the surface. As the tug of gravity changes, the distance between the two spacecraft will change. For eighty days, instruments on board GRAIL A and GRAIL B will measure the changes.

From the measurements, scientists will ultimately be able to produce in essence a lunar CT scan. “It provides us essentially with a picture of the lunar interior just like you make a picture of the inside of your body,” says Zuber.

One theory holds that the moon was formed from the material blown into space following a collision between the Earth and another giant body. If that turns out to be the case, it will give scientists a better understanding of how the inner planets of the solar system were formed.

NASA is also doing something it’s never done before on a planetary mission. It is dedicating instruments, in this case four cameras on each GRAIL spacecraft, exclusively to education. Middle school students and their teachers can go to the “Moonkam” website. On the site, they will find the exact locations the GRAIL probes will be flying over. They can pick a site and request that it be photographed.

Leesa Hubbard is a teacher in residence at Sally Ride Science which is leading the “Moonkam” project.  Sally Ride was America’s first woman in space. Hubbard says, “I think once they begin to look at detailed images, when they go out in their backyard and look at the moon, they’re gonna look at it in a whole new way and I think that’s priceless.”

The program is open to students and teachers around the world. After you register and your picture request is accepted, you can follow the process. You’ll see when the commands are sent to the GRAIL probes to take the picture, when the picture is taken and finally, when it’s down linked and posted on the website photo gallery.

Right now, the plan is for the first pictures to be taken next March. For the next eighty days after, teachers and students can get their own personalized lunar snapshots.