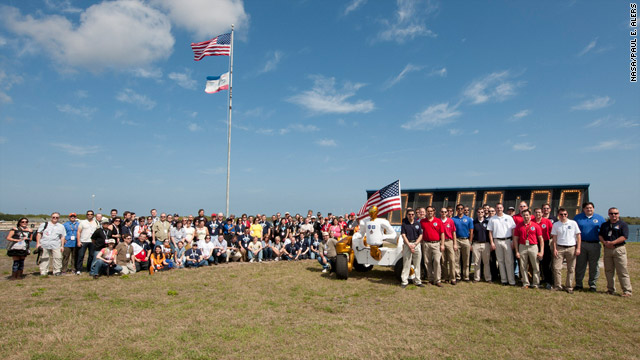 So what IS a NASA Tweetup?

This week, a special group of space lovers will travel to Kennedy Space Center to participate in the latest NASA Tweetup, which is expected to culminate in the launch of the moon-bound GRAIL mission.

So what's a Tweetup?

At its most basic, a Tweetup is a gathering of Twitter users, generally organized via Twitter and talked about on Twitter during the event. For NASA, Tweetups tend to be a formal program, lasting anywhere from two hours to two days long, and centered around a launch, person, event or anniversary. The first NASA Tweetup was held at the Jet Propulsion Laboratory in California in 2009, and the most recent event was for the launch of the Jupiter-bound Juno space craft in August. GRAIL's event is next, and it likely won't be the last.

I've had the opportunity to participate in two NASA Tweetups: the first for STS-133 Discovery in November and February; and the second in July at Johnson Space Center in Houston, as the facility supported the final mission of the space shuttle program.

My first Tweetup, for Discovery’s last flight, felt like an alternate reality.

I’d been to Kennedy Space Center’s press site before, as credentialed media, so I knew what to expect in terms of the environment. (Though, the countdown clock will always floor me.) What I was not expecting was the level of enthusiasm emanating not only from my fellow attendees but also from the NASA personnel who organized and participated in the event. Nor was I expecting the access we were granted to people and hardware. I was able to handle a shuttle-flown flag, which doesn’t mean much to most people but left me breathless. Everyone we met was genuinely excited to see us and more than willing to share stories of working in the spaceflight industry.

Among the highlights: We met astronauts Leland Melvin (@Astro_Flow), Shannon Walker, Dan Tani and Ron Garan (@Astro_Ron), who is currently aboard the international space station. Robonaut (@AstroRobonaut) favored us with a demonstration of his range of motion and capability. We were also allowed inside the Vehicle Assembly Building, where the lot of us took turns standing next to the solid rocket booster nose cone slated for the final flight of Endeavour with enormous smiles on our faces. #Permagrin became a popular hashtag. It was like being let loose in the world’s coolest candy shop with 149 of your best friends.

Let’s not forget T-0 (that means "booster ignition and liftoff"). When Discovery finally launched in February, I was watching from the press site, roughly three miles from the launch pad, with my housemates all around. It was quite a leap from watching as press, when some measure of decorum was expected. Videos from Discovery’s launch recorded our breathless anticipation, us screaming “our bird” on, going silent as solid rocket booster separation approached and cheering when the shuttle reached orbit. On mine, you can hear me laughing from the sheer joy of it, and pictures show group hugs and enormous smiles.

I rented a house with 14 other attendees, and I count them all among my favorite people to date. For a lot of us, it was the first time we’d had the opportunity to be space nuts among like-minded people, instead of chattering on excitedly about something only to receive blank looks from an uninterested listener. It’s one example of the exposure to a community that NASA Tweetups give their participants, and we did our best to share that exposure with our social networks: volumes of our excitement, new information, photos and commentary went out from phones, tablets and computers for the duration of the event.

NASA's been around for 50 years. For the bulk of those years, especially post-moon-landing, the public has viewed NASA and spaceflight, generally, as routine or even boring. Generating public interest has always been important to the agency, especially now as the space shuttle program ends and support, both public and political, declines. It seems that the overall view of spaceflight is that it's dangerous (true), expensive (relative to what?) and generally a misuse of time and resources (used GPS or smartphone lately? Thank NASA.).

Enter social media. In the past several years, tools such as Facebook and Twitter have opened new avenues for communication with the public. Organizations, private and public, have begun to leverage social media and the Internet to spread their messages rapidly, to a large audience, for not a whole lot of money.

NASA's been one of the most active agencies online, encouraging its astronaut corps to engage on Twitter, opening accounts for projects such as the Mars Phoenix rover and Juno, as well as creating and maintaining websites for various projects. NASA websites have even won Webby awards.

Twitter has opened up opportunities for conversation to anyone who wants to participate. The result has been huge: most Tweetups opened for registration have seen more applicants than spaces available, spawning the #NASAWaitup hashtag. Conversations between astronauts and regular people all over the world can be followed using hashtags (#FromSpace is one). Plus, people who might not have previously been interested or informed about the variety of functions NASA performs are involved now, as well as those self-described space nuts who have been paying attention all along. They're having conversations amongst themselves, asking questions, soaking in information and spreading the word. They are demonstrating that coveted public interest, and they are doing so passionately.

Want to know more about all the NASA Tweetups? Check out the Wikipedia page or NASA's page on Tweetups.

The idea of spacefight-related Tweetups is spreading beyond NASA, too. The European Space Agency (ESA) has announced their first Tweetup to be held this month in Cologne, Germany, and Twitter users are asking for SpaceX and Soyuz events as well.

So, if you're not familiar with the GRAIL mission, or even what NASA might be doing now that the shuttle has retired, check out the @NASATweetup and @NASA accounts. Keep an eye on the #NASATweetup hashtag. Check out @CNNLightYears' list of official NASA accounts and astronauts, and see what else might pique your interest. We're adding to both all the time.

And if you want to see what else exists in the spaceflight world, don't forget about @ESA, @SpaceXer and @JAXA_en. NASA's not the only space agency doing neat things.