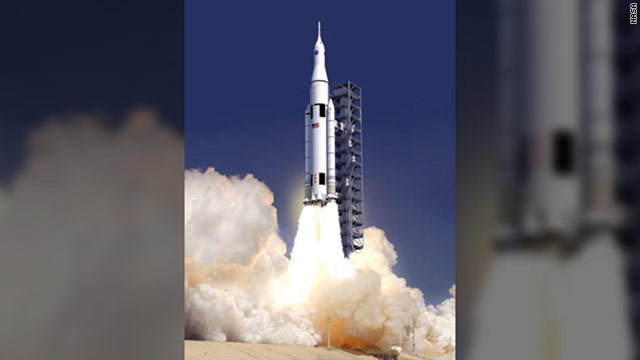 NASA plans most powerful rocket ever

For those still mourning the end of the shuttle program, there's a new reason to be excited about space exploration: It's called SLS.

SLS stands for Space Launch System. The rocket, announced Wednesday, will be the largest and most powerful ever built. Its first flight, which will probably be unmanned, is targeted for the end of 2017.

In theory, SLS will allow astronauts to go unprecedented distances; there's talk of going to an asteroid and, eventually, Mars.

At a cost of $18 billion over the next six years, you might be wondering whether that's realistic, especially at a time when NASA has been laying off employees from the shuttle program.

"If we don’t get exactly the annual budget we anticipated, we have enough flexibility in the program; we can accommodate that by doing some things," he said.

The $18 billion includes a substantial amount of design work, Gerstenmaier said, and includes some, but not all, costs of the second and third flights as well as the initial launch.

Much of amount the development has been minimized: The shuttle main engines can be used, and the solid rocket motors have been extensively tested. There's still a lot of work to do on the core design for the test flight and the upper stage design. The second and third flights might have to be delayed, but NASA is striving to stick to a schedule with a first launch in 2017.

"We’re going to try to protect, as much as we can, that 2017 milestone as we move forward," Gerstenmaier said.

SLS will have three engines initially but could grow to five engines, Gerstenmaier said. It will fly about once or twice a year.

After at least one unmanned test flight, SLS has been planned to transport astronauts on the Orion Multi-Purpose Crew Vehicle, which can carry six people.

Initially, SLS will be able to lift 70 metric tons, but that can be expanded to 130 metric tons when advanced boosters are added. That first version will have 10% more thrust than Saturn V did at its liftoff and will be slightly shorter. The second iteration of SLS will have 20% more thrust than Saturn V at liftoff. The Saturn V rocket was 363 feet tall, and the second version of SLS will be about 40 feet taller.

Saturn V is the rocket that NASA's Apollo and Skylab programs used from 1967 to 1973, and it is the only vehicle that has taken humans out of low-Earth orbit and to the moon.

SLS may look like the child of Saturn V and the space shuttle - at least, according to some Twitter users - but Gerstenmaier says that's not really true. There are similarities to the shuttle, but advancements in manufacturing techniques have made a big difference in terms of efficiency. There's lots that's new: for instance, solid rocket boosters that may be used for early test flights have advancements in nozzle materials and insulation to newer, green technologies.

"Even though rockets may look very similar, there are advances that are taken to get to efficiencies and to get to more reliable systems," said Doug Cooke, deputy associate administrator for NASA's Human Exploration and Operations Mission Directorate.