A NASA satellite is expected to re-enter Earth's atmosphere on or around  Friday, September 23, according to NASA officials on Monday.

Re-entry of NASA's Upper Atmosphere Research Satellite, or UARS, was originally expected in late September or early October 2011, almost six years after its mission was complete. 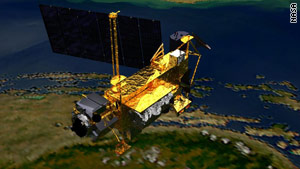 The satellite will break into pieces during re-entry, and not all of it will burn up in the atmosphere. The risk to public safety or property is extremely small, NASA says.

"Since the beginning of the Space Age in the late-1950s, there have been no confirmed reports of an injury resulting from re-entering space objects. Nor is there a record of significant property damage resulting from a satellite re-entry," NASA says.

NASA advises that if you find something that may be a piece of UARS, do not touch it and contact local law enforcement.

UARS was originally launched in 1991 and was decommissioned in 2005 after completing its mission. The satellite measured chemical compounds found in the ozone layer, wind and temperature in the stratosphere, and the energy input from the sun, according to NASA.

You can track the movements of UARS here.