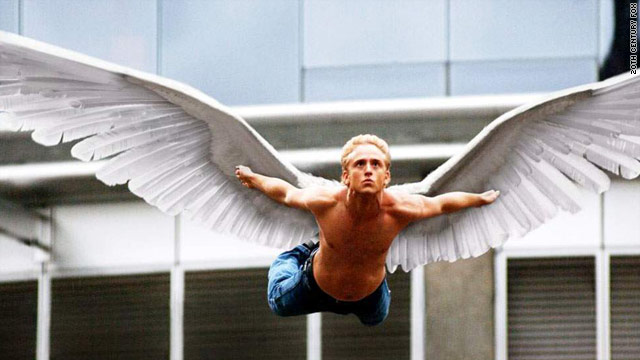 Humans are still evolving, scientists say, but don't expect any winged mutants like this one from "X-Men: The Last Stand."
October 3rd, 2011
03:00 PM ET

Ordinary people evolve to have extraordinary capabilities on TV shows like “Heroes” and movies like the "X-Men" franchise. In real life, people don’t have genetic mutations that give rise to wings or telepathy, but scientists say human evolution is still happening. A new study published in Proceedings of the National Academy of Science offers some of the best evidence so far.

Researchers at the University of Quebec at Montreal examined a very detailed database of church records for residents of Ile aux Coudres, a tiny island northeast of Quebec City, Quebec, between 1799 and 1940.

The data allowed scientists to track the ages at which female residents had their first-born children. Among those women, the average age of first reproduction dropped from 26 to 22. The study supports the idea that increasingly younger birth ages were influenced by genetic changes caused by natural selection. In other words, the propensity to have a child at a younger age is the result of inherited genetic traits, the study suggests. (Evolution means that organisms change over time based on inherited traits).

"The study is the first to demonstrate a genetic response to selection in a very important demographic trait in a human population in such recent times," said Yale University professor of evolutionary biology Stephen C. Stearns, who helped review the study.

The evolutionary change is likely due to falling mortality rates, says Stearns. Better hygiene, vaccines and medicine that allow more infants to survive, he says, are likely linked to ongoing evolution among the women on Ile aux Coudres who had children earlier with each successive generation.

But why does the study consider the mother's age at first birth a genetic trait rather than a cultural one?

Well, for one, the research offers genetic evidence that the trend of decreasing age of first birth was largely biological, says Stearns.

In general, there is a correlation between age at a woman's first menstrual cycle and age at first birth. That said, it's possible that the "inference" of the trend as a genetic trait was "contaminated" somewhat by "any element of culture - such as education, wealth or religion - that varied among families," he says.

The only way to draw a definitive conclusion, says Stearns, would be to measure culture as precisely as science measures genetics - which is impossible - or to study a large group of both identical and fraternal twins reared apart from birth - which is difficult.

As a result, Stearns says, "we must remain agnostic on a definitive conclusion."

The study "is probably one of the very best confirmations so far that human populations are still evolving," Stearns says. Until recently, it was assumed that humans hadn't changed in any significant way genetically since the ancient Greeks or earlier, he says.

"I think that science is now showing that it may be happening slowly - but we are still changing," says Stearns, who authored a similar study using detailed medical records beginning in 1948  from a group of people in Framingham, Massachusetts.

But a co-author of the new study, Emmanuel Milot, points out that just because "evolution is possible in rapid time, doesn't mean that it's occurring all the time."

"We're changing," Stearns says, "in ways that are being shaped by our culture."

It's not the first study to suggest this idea.

Tibetans in the Himalayas have evolved to better adapt to low oxygen at high altitudes over just a few hundred generations, according to research published last year.

Other studies revealed that adult humans in regions of Africa and Northern Europe developed the ability to tolerate lactose in their diets as recently as 5,000 or 6,000 years ago. Scientists say the evolution was linked to the cultural reliance on milk as an agricultural product.

"What is different with our study," says Milot, "is we follow the change from one generation to another in the population. The lactose tolerance and Tibetan studies are processes that occur during a longer time that leave patterns in the genes of the population."

The Quebec study will help scientists close in on one of the biggest cutting-edge questions in the study of contemporary evolution: How important is specific genetic makeup when it comes to medical treatment? Physicians in the future may improve health care by learning more about how treatment outcomes are linked to the particular genetic maps of their patients.

Although science has overwhelmingly accepted Charles Darwin's 19th-century theory of genetic evolution by natural selection, the concept still has its doubters. In fact, when CNN Light Years opened up the floor to reader comments on the topic of evolution, there were more than 3,500 responses, with a broad mixture of opinions, and clearly some people have strong views about whether religious beliefs can mesh with evolution. But the scientific community treats evolution as an established fact.

By the way, just for fun, we had to ask: What about super powers? Any chance that ongoing evolution will be creating any winged superheroes any time soon?

"No mutations producing another pair of appendages have ever been observed - among humans or any four-legged creatures - in 350 million years. That's among millions of different species - not only our own. It's not going to happen."