Dreaming of spaceflight? Here's your chance

NASA has just announced that it will open up the astronaut candidate selection process in November of this year. So if you've got at least a bachelor's degree in a math, science, or engineering-related field, plus three years of professional experience, here's your shot to travel to the International Space Station and possibly beyond.

Since 1959, when the Original Seven were named the first-ever astronaut class, only 330 individuals have been selected as astronauts to date. The astronaut corps has included engineers, doctors and teachers. Not all astronauts have a military background, either, though NASA does note that a successful applicant might have experience flying high-performance jets.

What might these newly minted astronauts fly on? NASA's press release states that this class, expected to begin training in 2013, will fly on "transportation systems now in development." Right now, both SpaceX and NASA have systems in development, and NASA is also supporting a Commercial Crew Program, with the goal of developing a safe and efficient transportation system.

The most recent astronaut class is the class of 2009, made up of nine men and women selected from over 3500 applications.

Think you've got what it takes? Find more information here.

This historic image shows a technician putting the finishing touches on Sputnik 1, humanity's first artificial satellite. The pressurized sphere made of aluminum alloy had five primary scientific objectives: Test the method of placing an artificial satellite into Earth orbit; provide information on the density of the atmosphere by calculating its lifetime in orbit; test radio and optical methods of orbital tracking; determine the effects of radio wave propagation though the atmosphere; and, check principles of pressurization used on the satellites." 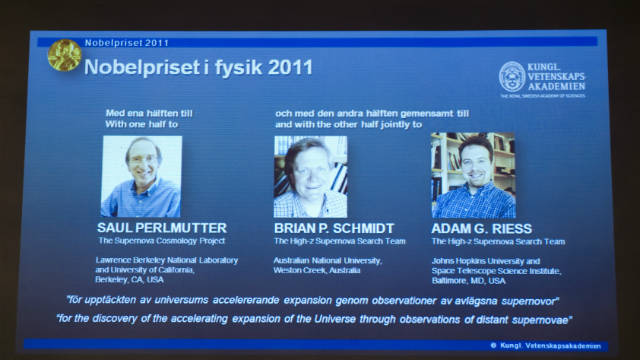 Two scientists from the United States and one from Australia have won the 2011 Nobel Prize in Physics, the Royal Swedish Academy of Sciences announced Tuesday.

Half of the award went to Saul Perlmutter from Lawrence Berkeley National Laboratory and University of California, Berkeley. The other half went to Brian P. Schmidt of Australian National University and Adam G. Riess of Johns Hopkins University and the Space Telescope Science Institute.

The prize in physics is worth 10 million Swedish kronor (about $1.44 million).

Scientists had known for a while that the universe is expanding because of the Big Bang about 14 billion years ago. However, the two teams that won this year's prize discovered that the universe's expansion was accelerating. They did so by studying a type of exploding star, called supernova.