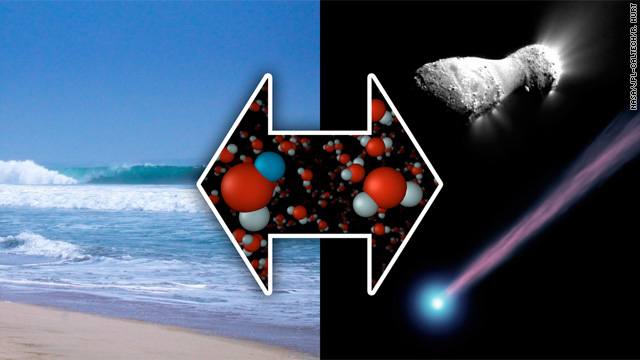 Earth's water may have come from comets

Earth was a dry, hot place immediately after it formed, with surface temperatures above 1,000 degrees; any water would have evaporated immediately. And yet today, 71% of our planet's surface is ocean. So where did all that water come from?

One theory is that it came from comets, and that hypothesis gets more support in a new study published in the journal Nature.

Scientists have found that the comet 103P/Hartley 2 has water with properties similar to the water on Earth. The comet is currently about 419 million miles from Earth. Scientists believe it originated in the Kuiper belt, which is near Pluto.

The ratio of deuterium to hydrogen in this comet's water is similar to what's found in the oceans that we know and love. Deuterium is an isotope of hydrogen that has one extra neutron per atom.

They believe that comets may have delivered much of Earth's water during the Late Heavy Bombardment, about 3.8 to 4.1 billion years ago, a period when Earth, our moon and neighboring planets were slammed by an unusually large number of asteroids and/or comets.

The bombardment may have happened because as Neptune got pushed farther away from the sun, past Uranus, material that was farther out in the solar system moved in toward Earth, Hartogh said.

The idea that comets brought most of our planet's water started circulating in the 1950s and 60s, but it got discredited when the European Space Agency sent a spacecraft to examine Halley's comet in 1986, and the hydrogen isotope ratio didn't match up with earthly water.

Six comets besides Hartley 2 have also been analyzed in recent years, and their water didn't have hydrogen isotope compositions similar to earthly water either. But these comets came from much farther away than the Kuiper belt, in a region called the Oort cloud.

"Now we are almost back to the old theory that water may have been delivered by comets," Hartogh said.