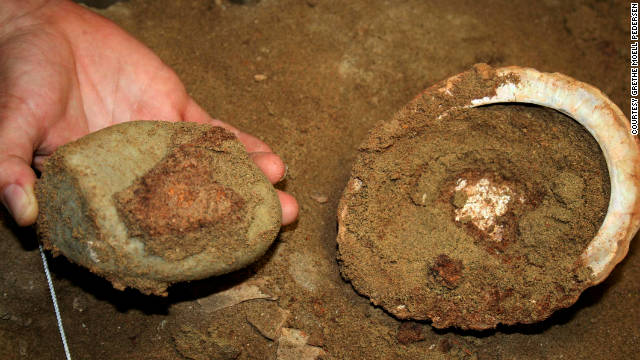 "The recovery of these toolkits at Blombos Cave adds evidence for early technological and behavioral developments associated with H. sapiens and documents their deliberate planning, production, and curation of a pigmented compound and the use of containers," the study authors wrote. 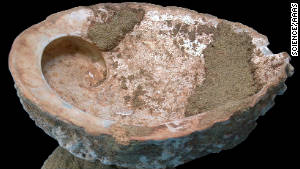 "Ochre" is the term archaeologists use to describe dirt or rock that contains red or yellow oxides, or hydroxides of iron; it is basically early paint. Researchers found hammers and grindstones that could have been used to make this ochre powder in the cave.

Additionally, they found two sea snail shells called abalone shells that probably served as containers to store a red concoction of ochre, bone and charcoal. Pigment residue on one of the bones suggests it was used for stirring and transferring the mixture out of the shell.

There is evidence that this mixture had been heated; perhaps liquefied bone marrow was used as a paste. Urine or water was also probably added to make it more fluid.

This is also the oldest evidence for use of a container, said Francesco d'Errico, study co-author and researcher at the University of Bordeaux in France. It appears that these containers were used multiple times.

"They really knew what they were doing. It’s not just idiosyncratic behavior, but it’s a very planned process," d'Errico said.

Ancient fragments of ochre have been found before from earlier than 100,000 years ago, but never in association with the objects to make it, or in containers, d'Errico said. Chemical analysis reveals three different types of pigment were used in this workshop, including yellow and red shades.

"It’s really relatively complex behavior going on there that clearly indicates that the production of pigment for them was not just occasional," d'Errico said. "It was a very planned process involving a number of different raw materials."

This cave seems to have been used as a workshop, and then the early Homo sapiens left it behind shortly after making these compounds. It appears that sand blew into the cave and very quickly covered these objects, preserving them throughout the millennia.

So far no paintings have been found on the walls of the cave. Scientists speculate that the paint was used for body decoration, or as an antiseptic for preparing animal skins, or both.

"It may be combination of functional and symbolic reasons," d'Errico said. "In traditional societies, these reasons – symbolic and functional – often go together. One reason cannot exclude the other."