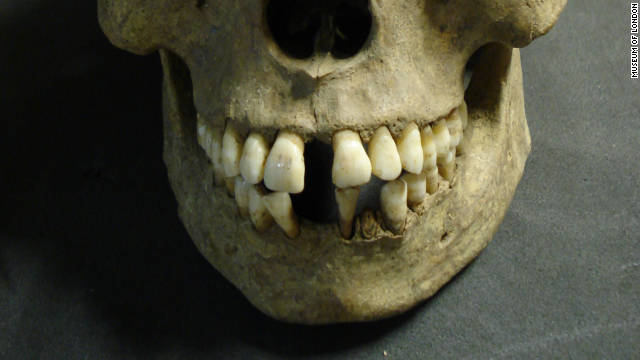 Scientists found bacterial DNA in teeth from medieval skulls like this one, from the Museum of London.
October 13th, 2011
09:34 AM ET

As the rains raged on in 1340s Europe, most of the crops rotted, leading to food shortages in a colder environment. Amidst the malnourished population, rodents, fleas and perhaps even lice were spreading a disease that had most likely never before infected humankind, and would wipe out up to half of Europe within five years.

This is the vision of the Black Death that scientists put forth in a new study in the journal Nature. For the first time ever, they have reconstructed the genome of an ancient disease based on skeletal remains.

They found out that the medieval plague is not so genetically different from its modern descendant, a disease that exists today in certain parts of the world. They are both caused by variations of the bacteria strain Yersinia pestis but the kind they discovered in the medieval remains appears to no longer exist.