If you've ever seen the movie "Apollo 13," you might remember the character Gene Kranz, a stoic man in a white vest who uttered the words "failure is not an option." That's the flight director, the individual ultimately responsible for the safety and success of every mission NASA has ever flown or will fly.

This month, NASA added three people to the ranks of active flight directors, bringing the total to 25. Judd Frieling, Tomas Gonzalez-Torres and Greg Whitney are the newest members of a group that has comprised 83 individuals over NASA's history.

Because NASA is no longer flying the space shuttle, flight directors are responsible for operations on the International Space Station and developing plans for future missions. Frieling, Gonzalez-Torres and Whitney will lead teams of flight controllers (the people who monitor each individual console in Mission Control), support personnel and other experts from around the world after undergoing training and completing certification.

Each of the new flight directors has served previously as a flight controller and holds a degree in aerospace engineering.

Frieling, a native Texan, has supported 20 shuttle flights as a Data Processing Systems officer and also supported the space station as an Onboard Data Interfaces and Network officer. He has been with NASA since 1997.

You might recognize Gonzalez-Torres from "Hubble's Amazing Rescue," an episode of "NOVA" on PBS. The show captured him on camera as the lead spacewalk officer for the STS-125 Hubble rescue mission. He has been with NASA since 1994.

Whitney has been with NASA since 2002 and has supported 14 ISS missions and 12 space shuttle missions. He was the lead Flight Activities Officer for the final flight of the space shuttle Atlantis.

Amateur sends a rocket to near-space

Amateurs sending rockets and balloons to the edge of space isn't unusual, but that doesn't make the launches and the images and data they return any less awesome. Derek Deville, an iReporter and 15-year amateur rocket enthusiast, sent his rocket to 121,000 feet before it parachuted home. The rocket, called Qu8k, was competing for the John Carmack prize, which awards $5,000 to the team able to send a rocket to over 100,000 feet and recover it.

Deville says Qu8k reached the required altitude, but that on-board GPS failed to record the data as the competition's rules require.

See the full iReport, including a link to on-board video.

Oil and water in microgravity

Kids from Potlatch Elementary School in Potlatch, Idaho get a shout-out from Cady Coleman and Paolo Nespoli onboard the International Space Station, as the astronauts perform the "pepper oil surprise" experiment in microgravity. 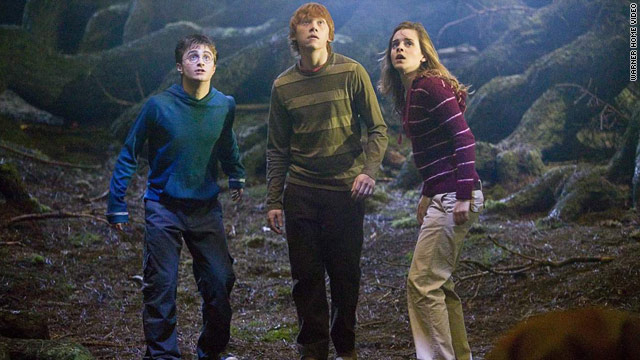 Researchers at the University of Texas in Dallas say they have discovered a form of "invisibility cloak," but don't think you'll have "Harry Potter" powers quite yet.

But, is it true that J.K. Rowling's fictional wizardry could become scientific fact? CNN Geek Out spoke with Dr. Ray Baughman, Director of The Alan G MacDiarmid NanoTech Institute there at UT Dallas, to find out.

CNN Geek Out: How did this experiment come about and how does it work?

Baughman: It started after Chinese researchers discovered that our carbon nanotube sheets can be used as thermo-acoustic loudspeakers. Loudspeakers of this type have been known for a long time. You heat up a material and it causes air surrounding the material to expand and you get soundwaves. 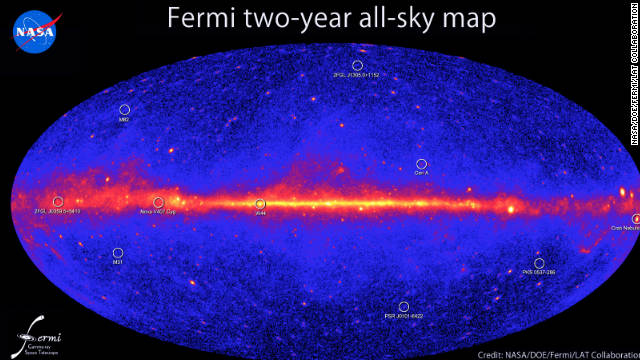 A map of gamma-ray emissions made by the Fermi Space Telescope. Nearly 600 of the sources are complete mysteries.
October 18th, 2011
12:54 PM ET

The Fermi Space Telescope has detected 1,873 gamma ray sources in space, and nearly 600 are complete mysteries, NASA wrote today on its website.

NASA's Fermi team has recently released the second catalog of gamma ray sources from its satellite's Large Area Telescope and have no idea where nearly one-third of gamma rays originated.

"This swirling landscape of stars is known as the North America Nebula. In visible light, the region resembles North America, but in this image infrared view from NASA's Spitzer Space Telescope, the continent disappears.

Where did the continent go? The reason you don't see it in Spitzer's view has to do, in part, with the fact that infrared light can penetrate dust whereas visible light cannot. Dusty, dark clouds in the visible image become transparent in Spitzer's view. In addition, Spitzer's infrared detectors pick up the glow of dusty cocoons enveloping baby stars.

Clusters of young stars (about one million years old) can be found throughout the image. Some areas of this nebula are still very thick with dust and appear dark even in Spitzer's view.

The Spitzer image contains data from both its infrared array camera and multi-band imaging photometer. Light with a wavelength of 3.6 microns has been color-coded blue; 4.5-micron light is blue-green; 5.8-micron and 8.0-micron light are green; and 24-micron light is red. This image is from February 2011."

Where to put a space shuttle?

Folks in Texas who are close to the space program were not happy from the get-go. Here they were, home to the Johnson Space Center, Mission Control, the Astronaut Corp., and they didn’t get one of NASA’s retired space shuttles.

They were angry. “No city in the world deserves an orbiter more than Houston, Texas,” said U.S. Representative Pete Olson from Texas.

Now, they are even angrier. “It’s a bait and switch,” U.S. Representative Ted Poe told CNN. Why does Poe say that?