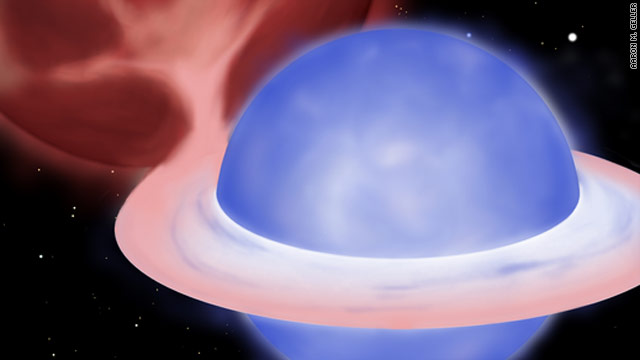 Why these blue stars should(n't) exist

Blue stragglers are stars that are observed to be brighter and bluer than we Earthlings would expect, since these characteristics make the stars appear younger than they actually are.

No one's been able to pin down how blue stragglers form. But a group of scientists report a theory in this week's issue of the journal Nature based on new observations.

Most blue stragglers have a companion star; the two form a binary system. But the companion is usually in a wider orbit than what's usually found in binaries. Blue stragglers are hotter than red stars, and are fairly rare.

Aaron Geller and colleagues at Northwestern University observed a cluster of stars that all formed at about the same time - 7 billion years ago - with 21 blue stragglers. The scientists looked at companion stars that are about half the mass of our sun. Blue stragglers tend to be more massive than our sun, on the other hand.

They believe blue stragglers form in a process called mass transfer. This happens when a red giant, a large star that's relatively old, has an outer envelope of material that is no longer gravitationally bound to the star anymore. The red giant transfers mass onto the blue star in the binary system. Material that comes from the red giant forms an accretion disk around the blue star.

"It was a pretty happy star living on its own, with this binary companion, until its companion grew to become a giant and then started dumping all of this mass onto it," Geller said.

This material can be used as fuel that this bluer star can use to burn at its core, which keeps it alive longer, Geller said. Eventually all of the outer layer from the red giant will go to the blue star, turning the red giant into a white dwarf, and the accretion disk around the blue star will go away.

"This bluer star will be blue straggler. It will [be] more massive than it was before, because it's gained all this material, and all this material is allowing it to stay bluer, brighter, longer than it should have," Geller said.

Scientists are observing the final state of this mass transfer process - systems with a blue straggler and white dwarf companion - but have not actually seen the transformation happen.

Geller and colleagues have not discovered any planets orbiting blue stragglers, but NASA's Kepler mission may come up with something in the future, Geller said.