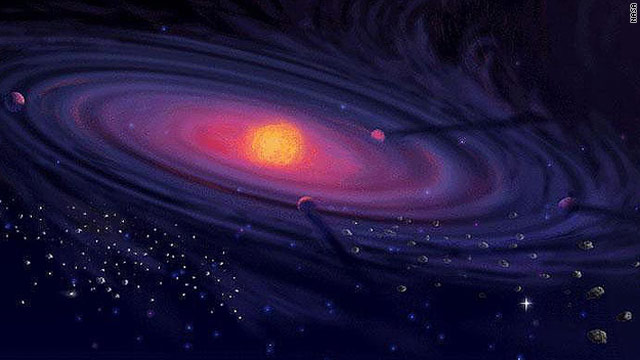 Planets form within a "disk" of dust and gaseous material surrounding young stars, as shown in this NASA illustration.
October 20th, 2011
02:00 PM ET

What's the recipe for a planet?

A discovery announced Thursday by the European Space Agency's orbiting Herschel observatory may reveal more about what ingredients it takes to cook up a new planet.

When stars are formed, they often leave a so-called "planet-forming disk" - shaped kind of like a pizza pie - with the star located in its hot center.

Water vapor often is an ingredient of that pie, but until now, water has only been found closer to the center where temperatures are hotter.

Scientists have observed a star named TW Hydrae - located about 175 light years from Earth - which has a lot of chilly water vapor closer to the edge of its planet-forming disk.

Because the vapor was found at the edge of the disk - where comets and giant planets are believed to form - it supports theories that comets and asteroids first delivered water to planets - such as Earth, says Akeson.

Water can play a key role in forming new worlds because ice condenses with other materials to form the cores of gaseous planets.

Ice in the disk also may help scientists learn more about how Earth got its water. When our planet Earth was formed, its hot temperature made the presence of water impossible, experts believe. Scientists think Earth's water may have come later, probably from ice on comets or asteroids from the outer part of the solar system.

Water is one of the essential ingredients to life on Earth. This new discovery helps us to better understand how planets are formed and how water is distributed in the universe.

Launched into orbit in 2009, the Herschel Space Observatory's vantage point above Earth's atmosphere will likely allow it to find more data that will help scientists learn more about how planets are formed.