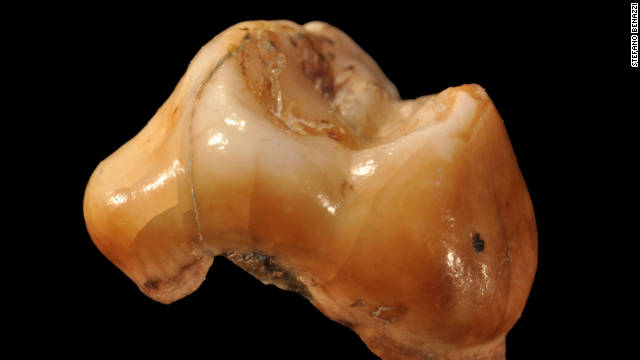 These humans may have had darker skin than modern Europeans, more like today's Africans, and perhaps more robust facial characteristics, but were otherwise quite physically similar, he said.

Higham and colleagues used a refined carbon dating technique called ultrafiltration to determine that the jawbone dates from between 41,500 and 44,200 years ago. Previous estimates had put it at about 35,000 years old.

Meanwhile, in southern Italy, a different team of scientists, led by Stefano Benazzi of the University of Vienna in Austria, found two molars that are about 43,000 to 45,000 years old. The teeth were found near shell beads and other ornaments.

"They have ornaments for the first time in this part of the world, like pierced shells and pierced teeth of sometimes dangerous animals like wolves and bears and lions, and a range of different tools that were made out of bone," he said. They may have also used wooden tools, but those aren't found frequently, he said.

The two discoveries together confirm humans' early dispersal into Europe from Africa, Higham said. These findings are published in the journal Nature.

"The process by which modern humans went out of Africa, how that happened, it may have been that it happened much earlier than we think," Higham said. And if they were in England by 41,500 years ago, they must have traveled fairly quickly.

Neanderthals also lived around this period, going extinct between 30,000 and 40,000 years ago. The Neandertal Genome Project has found that between 1% to 4% of modern human DNA in people living outside of Africa is shared with Neanderthals, suggesting that either there was interbreeding or that this is the remnant of shared ancestry.

"There's a big debate over whether Neanderthals had similar types of behavior" to the early humans, Higham said.

"The big question is the process by which modern humans went out of Africa, where they went and how that happened, and the date and which that happened. It may have been that it happened much, much earlier than we think," he said.