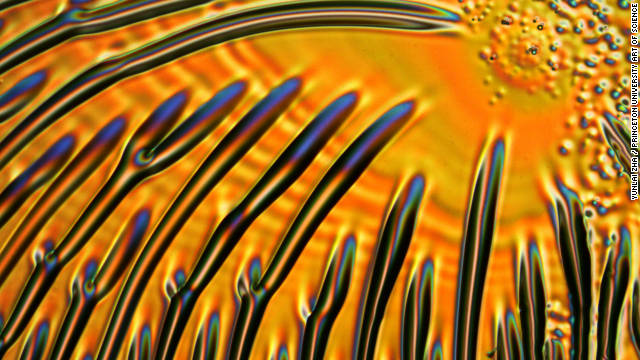 Celebrating the art of science

In the course of their work, scientists get to see some really cool things. Princeton University's Art of Science competition challenges researchers in the New Jersey school's community to capture some of that stunning beauty that is either natural or manufactured in the course of study.

Princeton released an online gallery for this year's contest today. Light Years is featuring some of them for your enjoyment.

The image above, by graduate student Yunlai Zha in the department of electrical engineering, shows arsenic sulphide dissolved in a solution, after being spin-coated and baked on a chrome-evaporated slide. 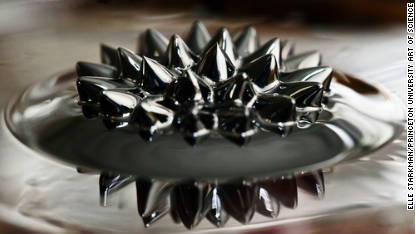 Believe it or not, this "flower" and the surrounding "water" are made of the same material: a ferrofluid, which is a liquid mixed with small metallic particles. In the presence of a magnetic field, it can become magnetized, and can be a liquid or a solid depending on whether there's a magnetic field or not, explains Elle Starkman of the Princeton Plasma Physics Laboratory. 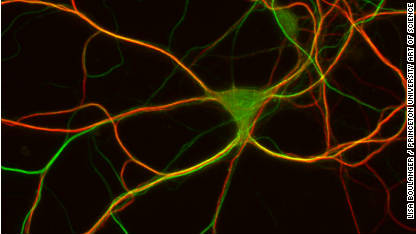 This mouse neuron has been growing for about two weeks in a tissue culture dish. Assistant professor Lisa Boulanger and her collaborator Lawrence Fourgeaud tagged the neurons with fluorescently-labeled antibodies so that they could see certain proteins of interest. In this image, under laser illumination, insulin receptors glow green and dendrites show up as red. The scientists collected this image using a spinning disk laser confocol microscope.

Boulanger uses these neurons to study specific immune system proteins that are found in the nervous system. Her research may help design new treatments to reduce the risk or slow the progression of a variety of disorders, including epilepsy, autism, schizophrenia, and type 2 diabetes. 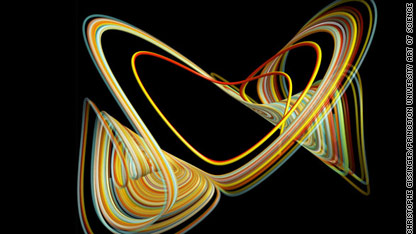 This is the winning image from this year's competition, "Chaos and geomagnetic reversals" by postdoc Christophe Gissinger. He shows here a model illustrating the reversals of the Earth's magnetic field.

Read more about this and other entries from Princeton.