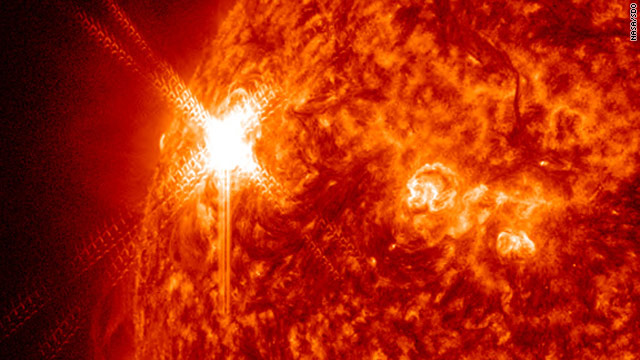 The year 2012 is almost here. And so is the end of the world, if you believe myths about the Mayan calendar and certain science fiction movies and books.

Solar flare activity is increasing and is expected to peak between 2012 and 2014 – around the time some believe the Mayan calendar ends. This has some people linking the flares to the End Times. But NASA scientists assure us that solar flares won’t destroy the Earth.

“We have a very long record that shows that even the strongest flares can’t blow out the atmosphere,” said Antti Pulkkinen, a research scientist at NASA's Goddard Space Flight Center in Greenbelt, Maryland. “There is really no way that even the largest disruption can end the world.”

Solar flares happen when a very large amount of electromagnetic energy is quickly released from the sun’s atmosphere.

The sun also can kick out something called a coronal mass ejection, or CME, which carries billions of tons of charged particles into space. When these mammoth clouds hit Earth's upper atmosphere, they cause beautiful auroras. They also can disrupt satellites, cause power grids to go down and scramble electronic gadgets.

The most intense CME on record, the Carrington Event in 1859, caused colorful auroras, even in the tropics, according to NASA. The storm also caused telegraphs – the high-tech electronic systems of the day – to go haywire.

Nowadays, many of us are carrying around technology far more sophisticated than a telegraph. Should you worry that a solar flare will kill the iPhone’s virtual assistant Siri or fry your smartphone? Pulkkinen says probably not, but CMEs have caused blackouts and can disrupt GPS satellites. They also interfere with radio waves, making trouble for airline pilots, who rely on them to communicate with the ground.

But even with all that power, NASA says the sun doesn’t have enough energy to hurl a fireball 93 million miles to destroy Earth. And Pulkkinen says scientists have made a lot of progress in predicting solar flares and CMEs, giving time for operators to power down their satellites and for you to buy a hand-crank emergency battery charger for your smartphone.