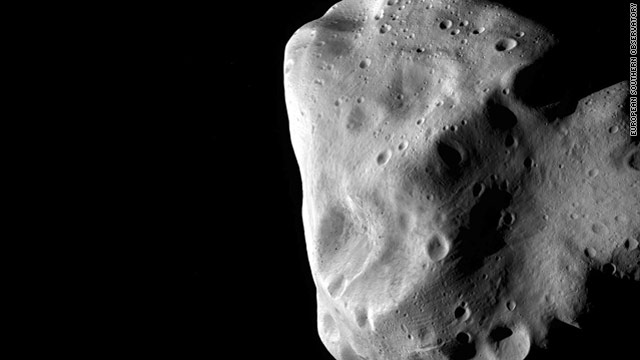 The origin of the asteroid Lutetia may have been solved, scientists say, and the new information could help them understand how Earth was formed.

Lutetia, a 62-mile-wide space rock resembling a giant dented potato, currently resides in the main asteroid belt between Mars and Jupiter. Scientists used to think objects found in the asteroid belt were born there, but Lutetia looks different.

Astronomers from France, Germany, the U.S. and Canada analyzed images taken by the European Space Agency’s Rosetta spacecraft in July of 2010 and combined them with data from European Southern Observatory’s New Technology Telescope at the La Silla Observatory in Chile, NASA’s Infrared Telescope Facility in Hawaii, and the Spitzer Space Telescope.

They found that Lutetia had a lot in common with a class of meteorites found on Earth.

"There is a specific class of meteorites called enstatite chondrites which have properties which are very similar with Earth's rocks," said Pierre Vernazza, an astronomer with ESO and the lead author of a new research paper on Lutetia.

Lutetia’s properties are nearly identical to those chondrites, which are thought to have formed close to the young sun and may have been a major building block of the rocky planets including Earth, Venus and Mercury. Lutetia’s similarity to the chondrites implies it likely formed much closer to the sun rather than in the asteroid belt, Vernazza’s research indicates.

If Lutetia was nearby when Earth was being formed, the asteroid may hold the long-sought material from which the terrestrial planets formed.

"With this work we have possibly tracked the first building blocks of the Earth," Vernazza said.

So how did Lutetia end up in the asteroid belt?

Researchers have a couple of theories. Maybe it was scattered by newborn planets or swept away by Jupiter as it migrated to its current spot in the solar system.

Vernazza says what we’ve learned from Lutetia gives us a picture of how the Earth looked when it formed and shows the baby steps of planet formation.

He hopes his team’s research will help spot the best asteroids to get samples from in hopes of tracking the origins on life on Earth.

“Obviously the most exciting thing would be bringing back a sample (of an asteroid) that would carry organics and the necessary components of life."

ESO: Lutetia - A Rare Survivor from the Birth of the Earth