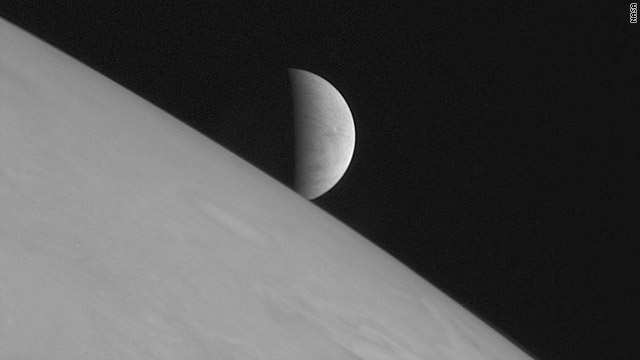 Lakes on Jupiter’s moon Europa may boost chances for life

Jupiter’s smallest Galilean moon, Europa, not only has a massive global ocean, it has huge lakes beneath its icy crust, according to new research.

NASA has been very confident for about a decade that there is a huge ocean on Europa, according to NASA program scientist Curt Niebur. But the ocean is capped by an ice crust and no one was sure about its thickness. Europa is relatively large among the dozens of moons of Jupiter.

New research announced Wednesday indicates the crust is thick, but it also shows that there are lakes above the oceans and that they are churning. This is key, because it means possible life forms in Europa’s oceans could make it the surface via the lakes to find food.

"One opinion in the scientific community has been, 'If the ice shell is thick, that's bad for biology — that it might mean the surface isn't communicating with the underlying ocean,' " according to Britney Schmidt, a postdoctoral fellow at The University of Texas at Austin's Institute for Geophysics and the lead author of a new study published in the journal Nature.

"Now we see evidence that even though the ice shell is thick, it can mix vigorously. That could make Europa and its ocean more habitable," she said in a statement.

This is fantastic news for scientists hoping find signs of life on Europa, said Niebur.

Scientists are basing their findings, in part, on what they learned from images taken by the old Galileo spacecraft, which was launched in 1989 to gather data and images from Jupiter and its moons. (It crashed into Jupiter in 2003). Those pictures show round bumps called chaos terrains. Based on the way ice moves around on Earth, the researchers developed a model to explain the bumps.

The only way to confirm the model would be to fly a spacecraft to Europa to investigate. A mission is on the drawing board, but NASA hasn’t approved anything yet, according to Niebur.