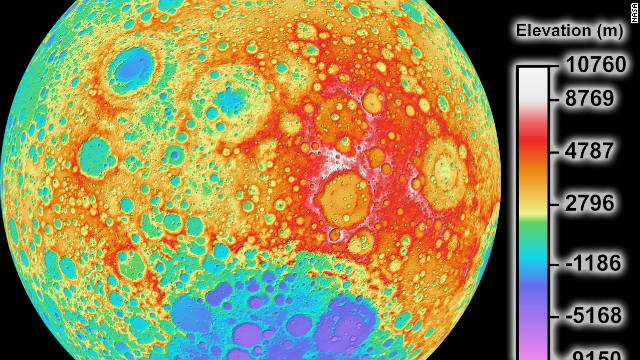 The map shows the surface shape and features over nearly the entire moon, according to researchers. It was composed from 69,000 stereo models from the Wide Angle Camera aboard the LRO.

This map covers 98.2% of the lunar surface; persistent shadows near the poles prevent a complete stereo map at the highest latitudes, NASA said. But another instrument on the LRO, called the Lunar Orbiter Laser Altimeter (LOLA), is very good at mapping at the poles, and can be used to fill in the gaps.

The colors on the map represent altitude.

Because of the limitations of instruments on previous spacecraft, a global map of the moon’s topography at high resolution has not been possible until now.

“Our new topographic view of the moon provides the data set that lunar scientists have waited for since the Apollo era,” according to a statement from Mark Robinson, principal investigator of the Lunar Reconnaissance Orbiter Camera at Arizona State University in Tempe.