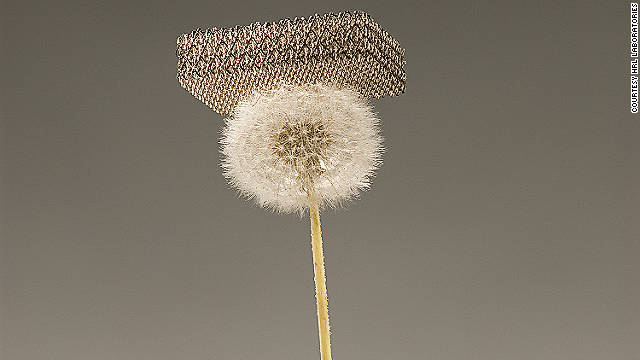 'Check out the world's lightest material'

It was a simple e-mail. But with just a few words, it capsulized the exact moment of an exciting scientific discovery.

"Check out the world's lightest material: 0.85 mg/cc!!" scientist Toby Schaedler wrote to his teammates at HRL Laboratories in Malibu, California. "It is holding up fine even after I squeezed it a little."

Six months later, HRL is announcing its discovery for the first time in a study published in November's Science magazine. When Light Years talked to physicist Bill Carter and project manager Leslie Momoda, the giddiness of inventing the lightest solid substance hadn't yet worn off. They were, well, practically floating on air.

"About a year ago, we were looking to create a competitive edge for our owners General Motors and Boeing," Carter said Monday. "Leslie threw down this challenge: If, in the future, fuel efficiency is everything, is there something we can do that's really new in the area of lightweight materials?"

The result was something informally named metallic microlattice - because the tiny hollow tubes are interconnected in a crisscross mesh or grid pattern, like a lattice window screen or garden trellis.

Exactly what is this stuff?

Well, for one, it's airy - 99.99% air. The rest of it is made mostly of nickel alloy. It weighs in at 100 times lighter than Styrofoam. It can sit atop a dandelion without crushing it. Also, the stuff is really, really thin - made of teeny-tiny interconnected hollow tubes - so small that the walls of the tubes are only a few hundred atoms thick, at 1,000 times thinner than a human hair.

What does it do?

Metallic microlattice absorbs energy. When it's compressed, it bounces back to its original shape, its inventors say. Developed for the Pentagon's Defense Advanced Research Projects Agency (DARPA), the stuff might one day be used in the manufacture of battery electrodes, according to HRL. The substance could eventually lead to the development of stronger, lightweight car bodies, aircraft fuselages or even protective body armor for troops, Carter said.

What makes it so strong?

A lot of the metallic microlattice's performance comes from its design. Like the Eiffel Tower and the Golden Gate Bridge, but on a much, much bigger scale, the arches give it a lot of strength for its relative light weight, Carter said.

HRL has a bit of a historic legacy to live up to. The company, which used to belong to enigmatic millionaire Howard Hughes, gave birth to the world's first laser 50 years ago. It also invented a semiconductor that was the basis for all modern integrated circuits.

Momoda asked her team to create a material that will improve fuel efficiency in aircraft or vehicles.
"If you make a car lighter, then people perceive a loss of safety," she said. "Our job is to try to figure out how to make it lightweight - or to take mass out of it - but preserve function."

How'd they do it?

After HRL invented the microlattice, it collaborated with the California Institute of Technology and the University of California, Irvine, to learn more about the microlattice's mechanical properties and the nickel alloy.
Actually, the invention began with a technique developed in 2007 by HRL scientist Alan Jacobsen. His innovation, teammates said, was creating a production process that could be replicated on a large scale.

In a nutshell, here's a basic description of how to make this micromarvel:

First, scientists use ultraviolet light to "grow" a tiny template of polymer fibers: The light is shined through a tiny perforated mask and into a reservoir of resin, which cures under the beams of light created by the holes in the mask. A microscopic polymer fiber forms along each of the tiny light beams, which are designed to interconnect and form a lattice pattern. The remaining resin is washed out, leaving a polymer template. Scientists then coat that template with a thin layer of nickel, and the polymer is then dissolved, leaving only the nickel microlattice.

What substance used to be the lightest solid material?

If HRL Laboratories' claim bears out, it would beat the low-weight density record set by a NASA-created substance called aerogel, which was declared by Guinness World Records as the lightest solid, at 3 milligrams per cubic centimeter. The HRL substance is 0.85 milligrams per cubic centimeter. The aerogel was invented for use aboard NASA's Stardust spacecraft, which captured particles from a comet in 2004.

Light Years was curious about the creative process among HRL scientists and how it feeds their work. In many cases, Momoda said, simple face-to-face contact and hallway chatter breed creativity.  It comes down to two words: "What if ... "

"One scientist might stop in the hall to chat with another," she said. "And one might say, 'Hey, I don't know something about this, but you do, and what if ... ' Sometimes, a lot of really great things can happen when you do that."