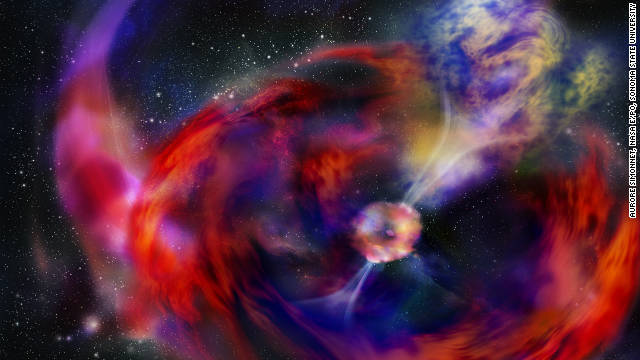 This is one model, depicted in an artist's impression, of a mysterious gamma-ray burst observed last Christmas.
November 30th, 2011
06:18 PM ET

Last Christmas, researchers got a present that wasn't so neatly wrapped: an unusual gamma-ray burst.

This week in the journal Nature, two groups of scientists offer differing explanations for the strange observations about this gamma-ray burst, detected on December 25, 2010. It was discovered by the Burst Alert Telescope on NASA's Swift satellite.

Gamma-ray bursts are the most luminous explosions in the universe, NASA says. In general, scientists observe one or two gamma-ray bursts every week, Christina Thöne of the Institute of Astrophysics of Andalusia, Spain, said in an e-mail. They are generally connected to some kind of massive stellar death, she said. One established explanation for them is the collapse of a massive star. The other is the merger of two compact objects, such as neutron stars.

"Every few years, we get something really puzzling, that forces us (and a lot of theorists in the field) to rethink our models on gamma-ray bursts," she said. It's unusual that this particular gamma-ray burst lasted 28 minutes.

One study, led by Sergio Campana at the INAF – Osservatorio astronomico di Brera in Merate, Italy, suggests it happened because a comet-like object crashed onto a neutron star, resulting in an explosion. A neutron star is the crushed core observed after a star much more massive than our sun explodes. Debris fell on the neutron star, scientists say, and material from the comet formed a disk around the neutron star.

"We envisaged a brand-new mechanism able to explain all the observations," Campana said in an e-mail. "This can help (shed) light on the presence of lonely asteroids in the galaxy, and/or on the formations of planets and asteroids around millisecond radio pulsars."

Campana's research says the explosion occurred in our own Milky Way galaxy, about 100,000 light years away. But the other theory, put forth by Thöne and colleagues, suggests that it happened in a different galaxy, 5.5 billion light years away.

A supernova is at the heart of the explanation that Thöne's group offers. They say a neutron star was orbiting a normal star, which grew to become a red giant. The bigger star basically swallowed the smaller star, and the outer layers of gas from the red giant surrounded them both. After about 18 months, they merged to become a black hole with jets of particles traveling at nearly the speed of light, which produce gamma rays. A weak supernova ensued.

"We hope that further observations of the host galaxy candidate (or whatever it is!) can shed more light on the nature of this very weird event," she said.

Neither of these models for gamma-ray bursts has ever been observed before, said Chryssa Kouveliotou, a NASA astrophysicist in Thöne's group. More evidence is needed to favor one of these hypotheses over the other.

"I’m very excited because this is really something different," Kouveliotou said.