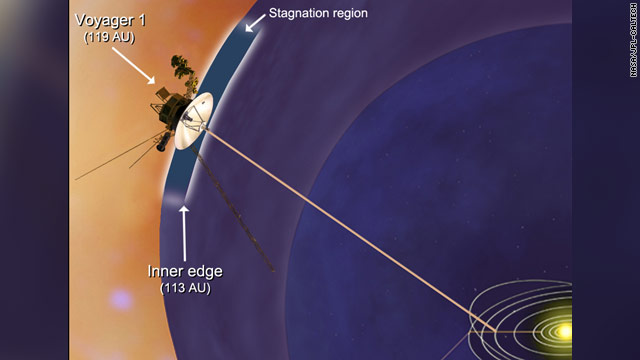 This illustration shows Voyager inside the stagnation region, and the distance of that region from the sun.
December 6th, 2011
04:15 PM ET

NASA's Voyager 1 spacecraft is 11 billion miles from our sun and has entered a region NASA is describing as a "cosmic purgatory," a part of space where there is very little solar wind.

The latest data, transmitted to Earth by NASA's Deep Space Network (DSN), show that Voyager 1 has entered a new region of space referred to as the "stagnation region."

"We've been using the flow of energetic charged particles at Voyager 1 as a kind of wind sock to estimate the solar wind velocity. We've found that the wind speeds are low in this region and gust erratically," says Rob Decker, a Voyager researcher at the Johns Hopkins University Applied Physics Laboratory in Laurel, Maryland, in a statement. "For the first time, the wind even blows back at us. We are evidently traveling in completely new territory. Scientists had suggested previously that there might be a stagnation layer, but we weren't sure it existed until now."

Voyager 1 is still within the heliosphere, the area around the sun filled with charged particles blown from our star, but the data indicate that the craft will cross into interstellar space in the relatively near future - the next few months, or few years.

That may seem like a big gap in the estimate, but consider that the Voyager 1 and 2 craft have been in flight for over 30 years. It's the most distant manmade craft launched from Earth, having overtaken Pioneer 10 in 1998.

Voyager 1 and her sister ship Voyager 2 were launched in 1977. Their original mission, to explore Jupiter and Saturn, resulted in the discovery of active volcanoes on Jupiter's moon Io, among other things. The mission was extended to include visits to Uranus and Neptune, which have still only been visited by Voyager 2.

Voyager's current mission is called the Voyager Interstellar Mission (VIM) and has the goal of extending exploration of the solar system to the edge of the sun's sphere of influence.