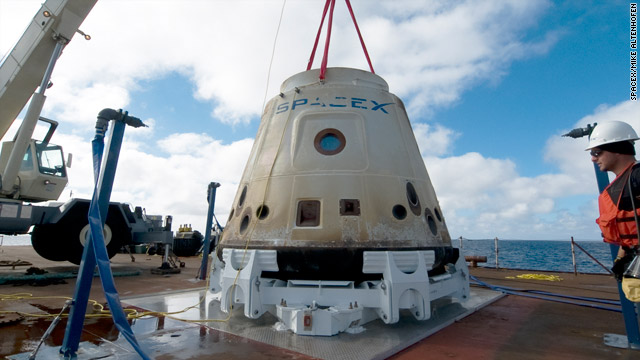 SpaceX gets permission to send Dragon to ISS

One day after the anniversary of the first successful flight of the Falcon 9 rocket carrying a Dragon capsule, NASA announces that SpaceX has been granted permission to rendezvous its Dragon capsule with the International Space Station. A successful rendezvous will make SpaceX the first commercial company in history to berth with the ISS.

The flight is scheduled for February 7 and is contingent upon final safety reviews, testing and verification of the craft. William Gerstenmaier, NASA's associate administrator for the Human Exploration and Operations Mission Directorate said in a statement, "There is still a significant amount of critical work to be completed before launch, but the teams have a sound plan to complete it and are prepared for unexpected challenges. As with all launches, we will adjust the launch date as needed to gain sufficient understanding of test and analysis results to ensure safety and mission success."

While in flight, Dragon will have to prove itself before being cleared to berth. Objectives include a fly-by of the ISS at a distance of about two miles, which will validate sensors and flight systems necessary to approach safely, and a demonstration of Dragon's ability to abort rendezvous.

On final approach, the station crew will grapple Dragon with the station's robotic arm. Dragon will ultimately berth to the Earth-facing side of the Harmony node. The mission will end with the crew reversing the process to detach Dragon from the Harmony node, after which the capsule will return to Earth for splashdown in the Pacific Ocean.

If Dragon isn't able to rendezvous and berth on this second demonstration flight, a third mission will attempt to complete the same objectives.

The space shuttle program ended when Atlantis landed at Kennedy Space Center on July 21, leaving NASA without a ride to the space station.

NASA has been paying the Russians to ferry up crew and supplies, but it plans to use commercial vehicles like the Dragon when they’re proven reliable.

The SpaceX flights are part of the Commercial Orbital Transportation Services (COTS) program, which invests resources into the private sector to encourage development of new spacecraft and launch vehicles. SpaceX has received $376 million of the $396 million allocated under the Space Act Agreement, for completing 36 out of 40 milestones.