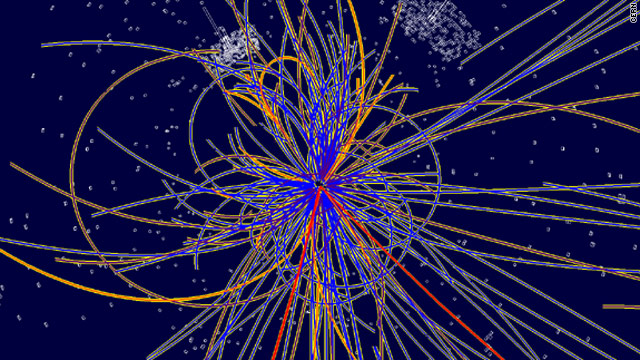 Gossip isn’t just for teenage girls – scientists spread rumors, too. Physicists are giddy about an announcement that will come from the European Organization for Nuclear Research (CERN) on Tuesday at 8 a.m. EST, although the details remain tantalizingly secret.

The word on the street is that scientists will unveil the first hints of the Higgs boson, also called the "God particle" in popular culture. This unimaginably small particle has never been detected, but would explain several unsolved mysteries about the universe – for instance, why building blocks of our world have mass.

But listen to Tuesday’s revelations with caution – there’s not enough data to make definitive statements yet about the Higgs, said Joe Incandela, the spokesperson for the Large Hadron Collider's Compact Muon Solenoid (CMS) experiment as of January.

Finding evidence of the Higgs would be a “very wonderful success of science and of people for four centuries,” said Gordon Kane, director of the Michigan Center for Theoretical Physics. And it would be a big payoff from CERN's $10 billion Large Hadron Collider, which smashes particles at unprecedented energies in an attempt to detect signatures of even smaller, more transitory particles that would help fill in gaps in the current thinking about the way the universe works.

This collider was set up to examine some of the fundamental questions about the universe that remain unknown: What happened right after the Big Bang? Why is gravity so weak? Are there extra dimensions, or is this it? Where did dark matter and dark energy come from?

Incandela compared the hunt for the Higgs to using binoculars. A year ago, scientists’ vision of the Higgs was very blurry; a year from now, something will come into focus. At this point, they are somewhere in between.

“For us, that’s a big deal. Even just to know we’re this close,” Incandela said. “A year from now, we’ll have enough data to make a definitive statement, one way or the other.”

Thousands of scientists worldwide collaborate on work related to the LHC, which is located 328 feet underground in a 17-mile tunnel. It produces 600 million particle collisions per second. The two general-purpose experiments at the collider are ATLAS and CMS; scientists from both collaborations are expected to deliver news about the Higgs on Tuesday.

ATLAS weighs about 7,700 tons, and has calorimeters to measure energy of particles and tracking detectors to record momentum in its huge magnet system. CMS is even heavier at 13,000 tons, and has a 43-foot-long superconducting solenoid magnet to measure particle momentum. The cylindrical coil of superconducting cable of CMS generates a magnetic field 100,000 times that of the Earth, CERN says.

In searching for the Higgs boson, scientists are using these detectors to look at 42 possible scenarios by which the Higgs would have decayed, Incandela said. That means a lot of people looking at a lot of data, and still more data is needed for firmer conclusions.

The LHC has already set its own world records for intensity of particle beams. In the next year, the collision rates in the LHC will be even higher, with energies up to 8 TeV (in 2011 it was 7 TeV), giving much more data to work with, Incandela said. The collider is currently on a break, but will resume research in April.

The Standard Model of physics, the best description scientists have for the world at a scale smaller than atoms, cannot completely describe the way the universe operates. Finding the Higgs boson would help explain the origin of mass, but that’s not the whole story for explaining all of subatomic physics, either.

That’s why physicists have come up with other theories – albeit untested – to describe the universe. What Incandela calls the “most complete and beautiful extension of the Standard Model” is a theory called supersymmetry, which can be represented in many different ways. In fact, supersymmetry predicts the existence at least five different Higgs, two of which have charge and three are neutral, Incandela said. The one physicists would most likely see is the lightest one, which is thought to be similar to what’s predicted in the Standard Model.

Even if that prediction pans out, though, it doesn’t mean string theory or supersymmetry is necessarily true, since there are many ways to arrive at a Higgs boson with a similar mass, physicists say. There are also several variations of string theory. And no experiments have validated these ideas yet, although proponents hope the LHC will deliver more evidence.

Still, Kane and colleagues are excited to hear what the experiments have found out about the Higgs.

“I don’t think there’s any question of it going away or being too weak to be important,” Kane says of the Higgs boson. “So, be ready.”