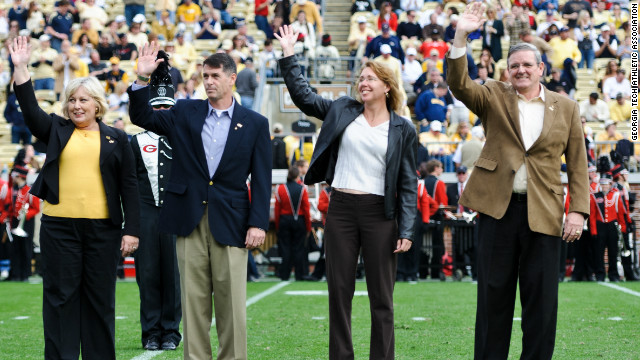 We say goodbye this weekend to 2011, the year that marked the close of NASA's space shuttle program.

The Georgia Institute of Technology recently honored alumni who have participated in the space program at its annual football game against the University of Georgia. CNN Light Years caught up with four Tech alumni astronauts, who reflected on their space experiences:

What he does now: Director, safety and mission assurance, NASA Johnson Space Center

Fun fact: Spent about 190 days on the International Space Station on his last flight, as the commander and ISS science officer

Do you get claustrophobic living on ISS? “Not at all,” McArthur said. “We can utilize the entire inhabited volume” - in other words, the walls and ceiling, too, so you quadruple the usable area. “You don’t tend to get that same sense of being closed in.”

What’s it like? “It takes a really conscious effort to walk somewhere,” he said. “What you really do is, you float.” Basically, if you want to get somewhere, you gently push off from where you are and float to the next location. Unlike in swimming, where you’re actually propelling yourself by pushing against the water, you’re coasting.

“It was just exhilarating to wake up in the morning and open the little doors on my sleep cubicle and float sideways out, turn the lights on, float to the end of the module.”

On the end of the space shuttle program: “I think we all agree it was time to look forward,” McArthur said. “It was time to say, ‘Can we do something more?’ ”

“Let’s go somewhere and begin to establish a permanent human presence on another celestial body.”

On the retirement of the shuttles: “It will break our hearts to see them go to museums, but that’s where they ought to go,” he said. In fact, he told the curators, “We’re like parents who have been told we can’t afford to keep our children anymore, so we have to put them up for adoption. Please love them as much as we did.” And they will, McArthur said.

His future: “I am done with going in space. When I see my colleagues up there, I’m a little bit envious, but I really enjoy what I’m doing now. I think I had more than my fair share of opportunities.”

What she does now: Still at NASA in the astronaut program

Fun fact: Was on the last flight of the shuttle program

On living on the International Space Station: “Being weightless is a big adjustment. You have to completely change how you do things. You have to keep track of your stuff at a whole other level,” she said.

“You have to be pretty organized. But then you’ve got these great views when you’re not working. You take a moment and pass over the Caribbean and take in all of the greens and blues.”

On the last shuttle mission: “The hardest thing was leaving the space station. When we docked, I felt like I was coming home. We opened the hatch, I immediately felt like I was home. It felt the same, it smelled the same, operations were the same, the environment was the same,” she said. “It was very hard to leave.”

What she does now: Works for Jacobs, a NASA contractor

On becoming an astronaut: “When I was young, it wasn’t possible” for a woman to go into space, Davis said.

“When I was growing up and even in college, there weren’t any women astronauts. [NASA] started selecting women in 1978. I was in grad school at that time. I decided that was something I wanted to pursue. It wasn’t anything I thought about when I was a young girl. You had to be military, and you had to be male.”

On the end of the shuttle program: “We as a nation don’t have the resources to have the shuttle and the next-generation rocket. We really need that next-generation rocket, and the only way to afford to do that was to cancel the shuttle. We need to make sure we build this rocket. We have ISS. We have people flying there right now. But we don’t really have human launch vehicles. We really need to do that program,” she said.

About commercial spaceflight: "I hope they have safe launches. We need that capability. I hope they’re successful."

What he does now: Still in the astronaut program, robotics branch chief for the Astronaut Office

First time in space: “Unbelievable,” Kimbrough said. “I felt like I was right where I always wanted to be. I was well trained. I wasn’t scared sitting on the launch pad, I was ready to go.”

On seeing Earth from afar: “I think it just strengthened my views and my values. We’re pretty darn insignificant when you look at the Earth from that viewpoint.”

“It’s borderless up there,” he adds. “No fighting going on up there. No busyness, even. I certainly brought that back with me. Maybe there’s hope one day that we can stop all this busyness and wars and things around our planet and get along.”

End of the shuttle program: “Most of us were big space shuttle fans. It’s just tough to end that era of the space program. We’re certainly moving on. Hopefully, we’re going to have bigger and better things down the road.”

Life post-shuttle: “We’re still training. Our job hasn’t changed a whole lot. The wait to fly in space has changed. With the shuttles around, we flew maybe every two to three years, but now, with only the Russian vehicle around, it takes about five to six years in between flights, because this line is very slow, and it’s very long.”

And he’s learning to speak Russian, both colloquially and technically, which is challenging. “We go to Russia and train about half the time instead of just being in Houston,” he said.

What’s the hardest part of being in the space program? “It’s like you’re back in school again. You have exams and evaluations. You’re constantly getting looked at and evaluated. Balancing that with kids and family life is the biggest challenge.”

Do you want to go to Mars? “I think I’ll be a little too old once we go to Mars,” Kimbrough said. “I would love to go to the moon, mainly because I grew up watching that as a kid. I think that would be a cool way to end my career, but I’m not sure that will happen either. Just to fly in space and continue exploring, and continue to help mankind here on Earth.”

On displaying the shuttles in museums: “I wish we would keep at least one or two down there - just in case we needed them, kind of thing  - but it looks like they’re de-servicing all of them and they’ll be put in museums, which is great for the country and the world to be able to go see them and continue to revel in the marvels that the space shuttle did."