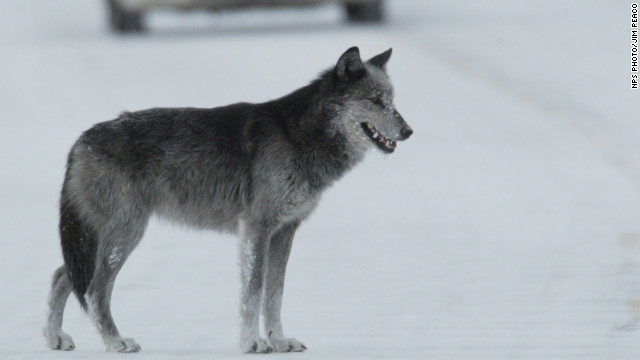 A gray wolf in Yellowstone National Park. The predatory animals were reintroduced to the park in 1995.
January 5th, 2012
11:59 AM ET

The wolves eat elk, which mean the elk aren't eating young trees, and in turn there are more mature trees creating better living conditions for animals from fish to birds to beavers to bears, according to the report from researchers at Oregon State University.

“The wolves have made a major difference in Yellowstone,” Robert Beschta, an Oregon State professor emeritus of forestry and co-author on the study said in a statement.

Wolves historically inhabited the Yellowstone area, but they were considered dangerous predators to livestock and humans and were eliminated from the park by 1926, when the last known wolf in Yellowstone was shot.

Gray wolves were reintroduced to the park in 1995.

Since then, “Yellowstone increasingly looks like a different place,” the study's lead author, Oregon State professor William Ripple, said in a statement.

"Trees and shrubs are starting to come back and beaver numbers are increasing. The signs are very encouraging."

The National Park Service said that as of the end of 2010, there were at least 97 wolves in the park. Those wolves were in 11 packs as well as six lone individuals.

In 2010, those wolves were associated with 211 elk kills, according to the park service.

According to the Oregon State report, the elk population has decreased 60%, from 15,000 to 6,000, since wolves have returned to Yellowstone. That means more mature populations of trees such as willows, cottonwood and aspen.

Besides creating homes for birds, those trees provide habitat for beavers. Beaver colonies increased from one in 1996 to 12 in 2009, the study said, providing habitat for even more creatures.

"Wyoming streams with beaver ponds have been found to have 75 times more abundant waterfowl than those without," the report said.

The healthier wolf population has also taken a toll on coyotes, who aren't consuming as much small game in the park, leaving more for animals from foxes to eagles.

“Predation and predation risk associated with large predators appear to represent powerful ecological forces, capable of affecting the interactions of numerous animals and plants, as well as the structure and function of ecosystems,” the researchers said.

Wolves are also thriving in Wyoming outside the park, according to the U.S. Fish and Wildlife Service. In October, the agency proposed taking the gray wolf population in Wyoming off the federal List of Endangered and Threatened Wildlife, saying the population was "healthy and stable."

"Wyoming wolves are ready to stand on their own under the management of the professional wildlife biologists of the Wyoming Game and Fish Department,” Fish and Wildlife Service Director Dan Ashe said at the time.