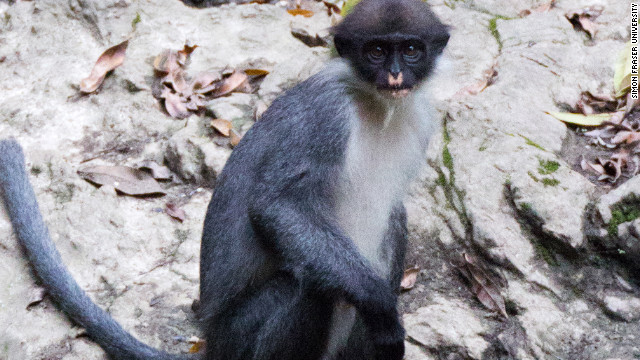 A primate thought to be extinct or near-extinction has been spotted in the rainforest on the Indonesian island of Borneo, researchers report.

Images of Miller's grizzled langur, a subspecies of Asian monkey, were captured on a time-lapse camera last summer and confirmed by researchers at Simon Fraser University in British Columbia and the University of Wisconsin-Oshkosh.

"When we found those first images, we were all pretty ecstatic," because many scientists had thought the creature was extinct, said Brent Loken, a doctoral student at Simon Fraser.

The Miller's grizzled langur is so rare that the researchers had trouble finding something to compare to their new pictures.

"There were no photographs that anybody else had taken of this monkey," Loken said.

The researchers had to use museum descriptions of the monkey to verify their find, Loken said.

UW-Oshkosh researcher Eric Fell said he got to see the creatures up close.

“I was sitting in a blind, so they couldn’t see me, but this one was 15 to 20 feet from where I was standing,” Fell said in a press release.

The Simon Fraser and UW-Oshkosh researchers found the langurs in locations 13 kilometers (8 miles) apart, a good sign for the species, according to UW-Oshkosh assistant professor Stephanie Spehar.

“The two places where Eric sited them and this other team that sited them are separated enough that these are two separate populations, which is significant because it indicates that it’s not just one isolated group,” Spehar said in a press release. “Because we found these two groups at the same time, that’s an indication that there may be a substantial population of these animals living there.”

Both groups of researchers found the Miller's grizzled langurs by accident.

Loken said he went to Bornea looking for the Bornean clouded leopard. He set up a time-lapse camera to hopefully capture images of leopard specimens, but it was the Miller's grizzled langur that got the camera time.

"When we first saw the monkey we were shocked because we weren't quite sure what it was," Loken said.

Fell was studying mineral licks, or ponds with natural mineral deposits where animals can get nutrients they require.

“Nobody would have been there to see these monkeys if Eric had not done this project and if he was not there observing the mineral licks. Without him doing this work, this discovery wouldn’t have happened,” Spehar said.