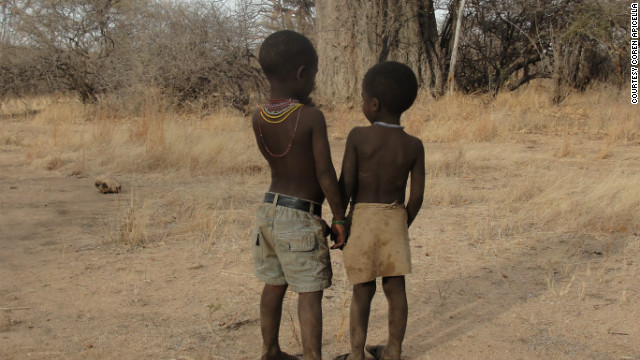 The Hadza are one of few hunter-gatherer groups in Africa. Scientists hope they will give clues about why humans share.
January 25th, 2012
01:00 PM ET

It was 2006 when a man approached anthropologist Coren Apicella and asked, “Have you heard about this man, Osama bin Laden? I just heard about him, and I heard he sets fire to things. I heard he’s hiding and he’s a very dangerous man.”

The man is from a society called the Hadza, one of the last remaining hunter-gatherer populations in Africa and one of the closest remaining approximations to how the earliest humans lived. This community in Tanzania is so cut off from modernity that news of bin Laden’s existence hadn’t reached this man until five years after 9/11.

People in Hadzaland may not use Facebook or drive cars, but they have something fundamental that's in common with the Western world: Their networks of social ties look a lot like ours, according to a new study led by Apicella. Most interestingly, researchers report in Nature, the Hadza tend to be friends with people who are similar to them in the behavioral traits of cooperation and egotism.

That’s a striking result if the Hadza are truly a window into the earliest human societies. Cooperative behavior - acting in a way that personally costs the individual but benefits others in the group - has always befuddled evolutionary scientists. Established ideas about natural selection suggest that only organisms with the “fittest” genes survive and reproduce; altruism isn’t part of that picture. But Apicella’s study offers an explanation.

“If we live in these networks where we tend to interact with people who are like us - cooperators tend to interact with other cooperators - altruists could help each to other to survive, and that’s how altruism as a trait survived in humans,” said James Fowler, professor of political science and medical genetics at the University of California, San Diego, and co-author of the study.

Apicella teamed up with Fowler and Harvard’s Dr. Nicholas Christakis, the duo that has risen to prominence in the study of social networks. They’ve had their hands in research showing how everything from happiness to obesity to loneliness spreads through networks of people who know one another, and consolidated the wealth of knowledge on this subject in the book “Connected.”

Scientific studies have found that people who resemble one another physically, and even genetically, tend to form social ties. There’s a genetic basis for networks, too. Identical twins tend to structure their networks the same as each other, and more similarly than fraternal twins do, Fowler said. That got the researchers interested in how far back in human history modern social network structures have existed.

"One of the reasons why I think Facebook is such a phenomenon: It’s because it's tapping into something that’s part of our identity as humans," Fowler said.

Who are the Hadza?

Apicella has been visiting the Hadza since 2004, and all of her trips put together total over one year with them. She communicates with them in Swahili, although they primarily speak a click-based language they call Hadzane.

Their society has a sexual division of labor, Apicella said. Men hunt everything from rats to zebras, while women gather berries. When the weather is dry, the Hadza will sleep outside. During the rainy season, women build grass huts with tree branches and dry grass.

Hadza individuals are not tied down to any particular camp, and the camps themselves shift location every four to six weeks as resources in the area get used up. People tend to stay with their immediate kin and children.

But the Hadza aren’t completely isolated; they're having increasing contact with modern society. Anthropologists such as Apicella and her adviser Frank Marlowe have visited them. The Hadza also have contact with pastoralists who keep sheep and goats, and tourists have also discovered at least one part of Hadzaland. There are about 1,200 members of Hadza society known, Fowler said.

“The Hadza are remarkable, in that what we have essentially is a population that have retained hunter-gatherer lifestyle, and are living in an environment in East Africa, an environment in which human evolution occurred,” Apicella said.

In the new Nature study, the researchers did a few experiments to test the structure of Hadza social networks. They asked Hadza from 17 different bands whom they would prefer in their next band. Researchers also gave Hadza individuals three honey sticks and asked them to secretly name a recipient for each stick. Honey is beloved by the Hadza.

To differentiate cooperative people from the rest, researchers gave the Hadza participants four honey sticks that they could anonymously contribute to a communal pool if they wanted. They were told that contributing a stick to the pool would lead to that stick being tripled, and given out to band members equally. Each person could choose to keep all, some or none of the sticks. Those who gave sticks away were considered to be more “cooperative” because they would be personally worse off but made the group better off.

“The social network is just as important as genes and the physical environment in explaining these clusters of cooperation that we find,” Fowler said.

And like us, a person who names another as a friend is likely to have the friend name the first person as a friend, too. And they tend to befriend people similar to them in height, weight and age. Most friendships are with people who are geographically close, which makes sense since it’s costly to walk long distances to visit others.

Apicella hopes to return to the Hadza for further research.

“I think this is going to be a lifelong pursuit for me,” she said. “As long as we have them, I think they’re worthy of study.”