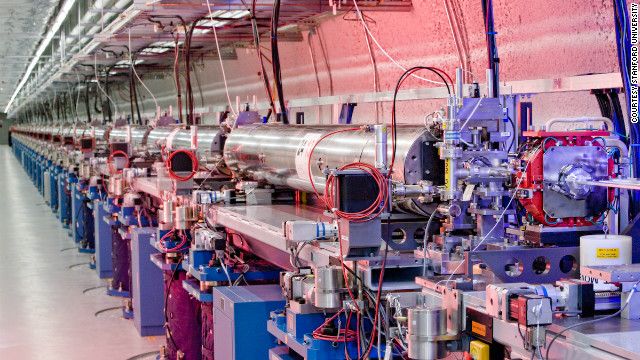 The LCLS undulator array contains 33 magnets that create the x-ray laser from a pulse of electrons.
January 26th, 2012
05:30 PM ET

Researchers at Stanford University reported a breakthrough in X-ray laser technology in this week's Nature: a super-powerful free-electron X-ray laser that can be used to measure change in matter over tens of hundredths of a second, faster than they've ever been able to measure before.

X-ray lasers aren't a new thing. In fact, this laser is based on an existing X-ray laser, the Linac Coherent Light Source (LCLS) at Stanford, which has been in operation for two years.

In order to produce this new X-ray laser, researchers focused the light from LCLS through neon gas, which produced a laser that's not quite as bright as the LCLS, but is also a single frequency, unlike the LCLS. What makes this particular laser special is that single frequency, as it makes the laser capable of much more precise measurements than the LCLS, over much shorter spans of time, says physicist Jon Marangos of London's Imperial College.

What does this mean to you, the average person? At the moment, not too terribly much, at least not in the short term. Marangos says science is a long way from practical applications for this technology.

But for researchers who are working to study how matter, particles, change over incredibly short periods of time, this X-ray laser means that they can look at objects with higher resolution than ever before, according to Marangos.

It means that people doing medical research, for example, may be able to see how a particular drug affects a specific molecule over a previously unmeasurable length of time, which Marangos says could potentially lead to the discovery of new drugs.

Marangos says another possible long-term application, which could prove important in the U.S. as the nation moves to energy independence, lies in examining and capturing the energy of natural light - the sun.