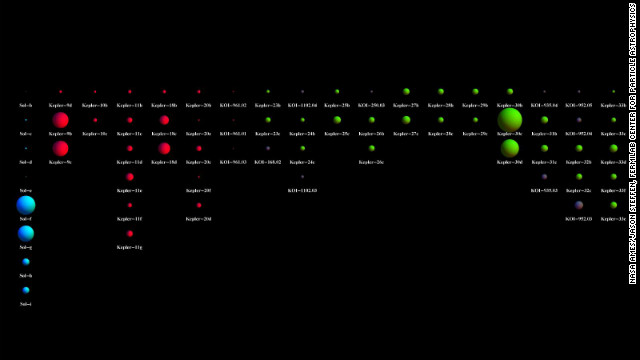 The Kepler mission has discovered 11 new planetary systems with 26 verified planets in the Cygnus and Lyra constellations, NASA said Thursday.

Before the Kepler satellite was launched in 2009, scientists knew about perhaps 500 planets outside our solar system "across the whole sky," said Doug Hudgins, Kepler program scientist at NASA.

"Now, in just two years staring at a patch of sky not much bigger than your fist, Kepler has discovered more than 60 planets and more than 2,300 planet candidates," Hudgins said in a news release. "This tells us that our galaxy is positively loaded with planets of all sizes and orbits."

Kepler's primary mission is to search a small patch of our galaxy for planets orbiting in stars' habitable zones (areas where temperatures permit liquid water on planets' surface). But habitable zone or not, the Kepler team is documenting whatever planets it finds.

None of the 26 newly verified planets is in a habitable zone, as each is closer to their star than Venus is to our sun, NASA spokeswoman Michele Johnson said.

The planets, all between 1,000 to 10,000 light years from Earth, range in size from 1.5 times the radius of Earth to larger than Jupiter, with 15 being between the size of Earth and Neptune, NASA said. More study is needed to determine which are rocky and which are gaseous.

Kepler, which is monitoring more than 150,000 stars, identifies possible planets by looking for dips in the stars' brightness caused by crossing planets. At least three crossings and follow-up observations from telescopes on Earth are needed to verify planets.

Each of the newly confirmed planetary systems - named numerically, from Kepler-23 to Kepler-33 - has two to five planets. The discoveries were published in four separate papers in the Astrophysical Journal and the Monthly Notices of the Royal Astronomical Society.

Thursday's announcement comes about a month after NASA said that the Kepler team found two roughly Earth-sized planets, including one that is the closest to the Earth, in terms of size, in the known universe.

Also last month, the Kepler team said it made its first discovery of a planet in a habitable zone, about 600 light years from Earth.