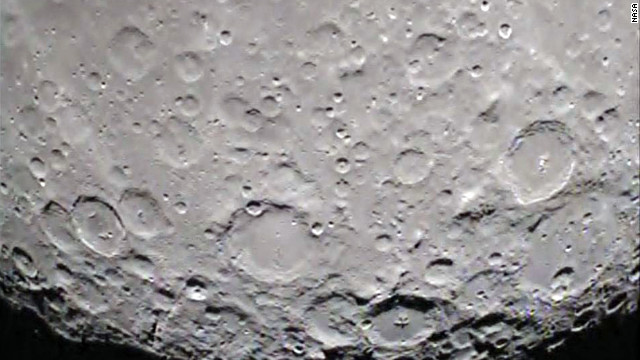 The GRAIL mission's Ebb spacecraft took this picture of the south pole of the far side of the moon.
February 2nd, 2012
10:09 AM ET

(CNN) - A NASA orbiter has beamed back its first images of the far side of the moon, including scenes of a massive crater caused by an ancient cosmic impact, the space agency announced Wednesday.

NASA released 30 seconds of video from one of the twin probes that arrived in lunar orbit on December 31 and January 1. The Ebb orbiter passed over the moon from its north to south poles, revealing a new view of the Mare Orientale, a 560-mile basin along the border between the near and far sides of the satellite.

Also visible was the smaller Drygalski crater near the lunar south pole, which has a star-shaped peak at its center from what NASA says was a comet or asteroid impact.

Ebb and sister ship Flow are part of the space agency's GRAIL program. For 82 days, their instruments will chart the lunar gravitational field, giving scientists a peek into what goes on beneath the surface - and possibly an insight into how the Earth and its neighbors formed.