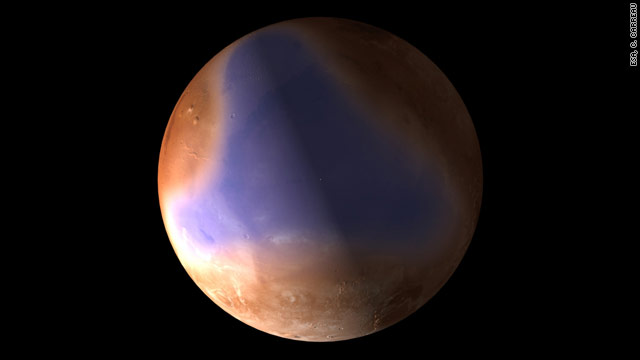 The European Space Agency's Mars Express shows sediments that could indicate oceans were once present on the red planet.
February 6th, 2012
03:39 PM ET

Mars may have had oceans

The idea that Mars once had oceans is a controversial one: It's been proposed before, and formations that look like shorelines have been found in images from a variety of spacecraft.

Now scientists, after analyzing data from the European Space Agency's Mars Express mission, have concluded that the northern plains of Mars may have had an ocean.

Mars Express' MARSIS radar, deployed in 2005, penetrates deep into the Martian surface. Scientists from the Institut de Planétologie et d’Astrophysique de Grenoble and University of California, Irvine, say that the first 60 to 80 meters of the planet's subsurface shows evidence of sedimentary material and ice, indicating that an ocean could have existed there.

Scientists are proposing not just one, but two possible oceans in the same area. The first ocean would have existed 4 billion years ago when Mars was warmer.

The second would have existed 3 billion years ago after Mars sustained an ice-melting impact. It would have been temporary since the water either refroze or vaporized into the atmosphere.

Evidence of oceans in this case doesn't indicate life, however, the scientists say. The second, temporary ocean probably wouldn't have existed long enough to sustain life, the French institute's Dr. Jérémie Mouginot said in a statement. To find life, astrobiologists will have to study parts of Mars' history when water may have existed for longer periods of time.