You won't be alive to see the way the Earth looks in 100 million years, but as the name suggests, it would "amaze ya."

Amasia is what scientists are calling the supercontinent that they predict will form as the continents we know and love drift toward one another and collide, closing the Arctic Ocean and fusing around the North Pole. Antarctica may be left out as a loner, however, as Australia snuggles up to Asia between India and Japan.

While the northern coast of North America would form a mountain range, the United States' West Coast will probably be the edge of this supercontinent, geologist Ross Mitchell said.

In a study in the journal Nature, Mitchell and colleagues at Yale University propose a new theory of how and where this supercontinent will form. 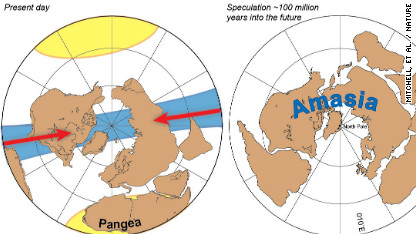 Between 50 and 200 million years from now, the next supercontinent, Amasia, will take shape, Mitchell said. And we're well halfway into the cycle of its formation; most of Asia has been created since the rifting of the last supercontinent, Pangea, he said.

Considering trends in mammalian evolution over the past 20 million years, individual species tend to last only about 2 million years, so there probably won't be any humans living on Amasia.

"None of us will be around 100 million years from now to be able to test these supercontinent models, but it’s nonetheless interesting to think about how humanity fits in this larger tectonic dance," Mitchell said.

Why do supercontinents form?

Continents and oceans as we know them are not permanent. Instead, continents drift across the surface of the Earth, and oceans aren't stable. German geophysicist Alfred Wegener proposed this idea about a century ago, and it gained further credence in the second part of the 20th century as scientists began to study plate tectonics. Basically, underneath us, there are solid slabs of rock called plates, and they move in different directions because of convection currents.

Earthquakes result from plates rubbing against one another. The Ring of Fire, a region we know today where most earthquakes happen and volcanoes lie, marks the edge of the previous supercontinent, Pangea, and is about 90 degrees away from it. The seismic activity of the Ring of Fire will result in the formation of Amasia.

Geologists say that when Pangea broke apart, new oceans were created, and more ocean in one part of the world means there's less somewhere else. "This is why, all around the Pacific, the ocean floor is being sucked back down into the planet in a process called subduction," writes Ted Nield in the book "Supercontinent."

But exactly why supercontinents break up after they form remains a mystery, Mitchell said.

Before Mitchell's study, there have been two theories about the next supercontinent, extroversion and introversion, although they don't have much to do with its personality.

Proponents of extroversion believe the continents will drift away from a supercontinent and eventually scoot around to the opposite side of the globe, 180 degrees from where the old one was.

Introversion is a little simpler, stating that the next supercontinent would form where the last one did.

But Mitchell's group argues that Amasia will be 90 degrees away from Pangea was. The Yale researchers used as the basis of their analysis insights from minerals from ancient rocks, which reflect the Earth's magnetic field. Geologists are able to infer how a continent moves through time with respect to the North Magnetic Pole based on that.

The introversion and extroversion models provided a set of testable predictions for supercontinents of the past but could not really give estimates for the future, said Peter Cawood, chairman of Earth Sciences at the University of St. Andrews in Scotland and former president of the Geological Society of Australia.

Mitchell's study is important because it provides explanations for how we get from one supercontinent to another, Cawood said in an e-mail.

"In the past we have wondered if there is 'method in the madness' of continental reconstructions and the position of continents through time. If this paper is correct the answer is yes, there is indeed a method," Cawood said. And that method is "driven by processes deep within the Earth."

Amasia will take shape at the North Pole, and then, as it matures and heats up, it will drift down toward the equator and nestle there, Mitchell said.

"Understanding the past distribution of continents, either individually or when periodically amalgamated as supercontinents, is fundamental to understanding the history of the Earth," Cawood said. "Continents are the archive of Earth history – not just of the rocks themselves but of past climate, oceans, life, etc. And the distribution of the continents has an important influence on these features."

Cawood added: "Pity that it will take hundreds of millions of years to happen and we won’t be here to see it!"