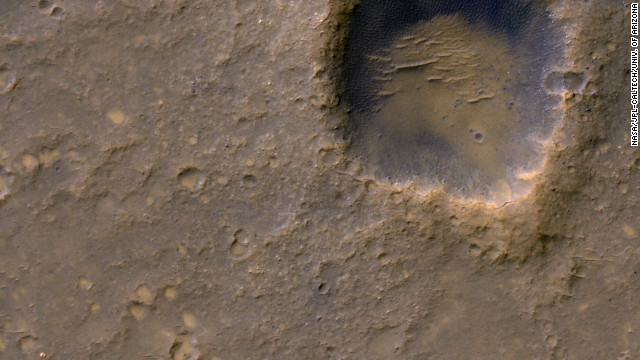 The first color image of Spirit's lander platform (in the extreme lower left -- it's NOT easy to spot) was taken from orbit last month.
February 8th, 2012
05:51 PM ET

Wow! You often hear about big stuff on the ground being "visible from space," right ?

Usually, you hear about The Great Wall of China. We've seen photos of the smoldering ruins of the World Trade Center from the orbiting international space station and images of the sunken hulk of the Costa Concordia off Italy.

But how about this?

A photo of the lander platform for the Spirit robot rover on the surface of Mars - some 69 million miles away - taken by the Mars Reconnaissance Orbiter about 200 miles above the Red Planet. Yep, eight years after delivering the then-star of the Jet Propulsion Laboratory,  the platform is still standing. Located in the lower left of the photo, the platform has a reddish color - likely from exposure to Martian dust.

NASA says this is the first image from orbit to show Spirit's lander platform in color.

It's pretty nice resolution for a hunk of high-technology measuring about 9 feet across and weighing about 800 pounds.

During its six-year heyday, Spirit poked around a Martian plain while investigating volcanic rocks and craters - about two miles east of this landing site.

In fact, Spirit took humankind's first microscopic image of the surface of another planet, according to NASA, and the first-ever look inside a Martian rock.

Then after accomplishing its primary mission, it headed for nearby hills to look for evidence of Martian water. Spirit found evidence that volcanic rock might have been affected by water long ago.

So keep on keepin' on ro-bros ... we here on Earth will be looking in on you from time to time.