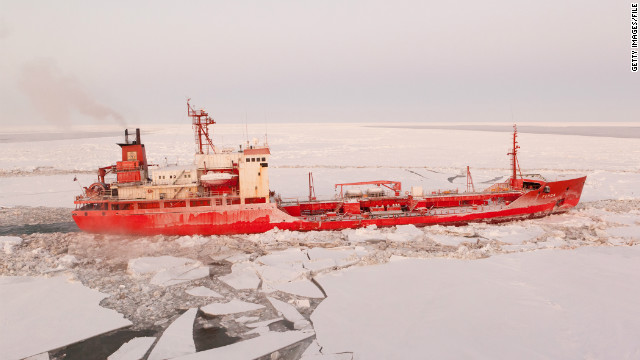 Travel through the waters off the coast of Alaska can often be hampered by ice.
February 9th, 2012
06:33 PM ET

To drill or not to drill more in the Arctic?

At stake is nearly 30 billion barrels of oil. That's the amount of recoverable crude under the Arctic Ocean near Alaska, according to government estimates. Shell Oil hopes to begin drilling this year to tap into the reserves.

But environmentalists and researchers say more study is needed before Shell or any other company gets the go-ahead.

In late January, nearly 600 scientists sent a letter to President Obama and Interior Secretary Ken Salazar demanding the administration focus on the science of drilling in the area. They urged the president to consider a USGS report issued last summer that gave 62 “pressing needs,” the letter stated.

“There’s a great deal of national value at stake in the environment in northern Alaska,” said Pew Arctic science director Henry Huntington, who is based in Alaska.

Huntington said more studies need to be done of the species that live there, principally the fish.

“There have been very few scientific trawl surveys of fish in the Chukchi or the Beaufort (seas),” he said.

He mentioned the walleye pollock, a significant target of commercial fishermen. In 2008, they were discovered in the Beaufort during a survey by the National Marine Fisheries Service. The Alaska Daily News reported it was the first study of the Beaufort since the late 1970s. It also said the federal government had spent $60 million on research. Shell said it had spent more than $500 million.

Shell said there have been enough studies.

“A 100-year compendium of scientific data proves the Alaskan Arctic is one of the most studied regions in modern history,” Shell Alaska Vice President Pete Slaiby said in an editorial posted on the company’s website.

Alan Springer, a professor at the University of Alaska Fairbanks and one of the 573 signees of the letter to the White House, said that while there is still a lot to be studied, enough is known about the region and about drilling to block oil exploration.

“You always want to know more, that’s the nature of a scientist,” he said. “But we know enough to know it’s a bad idea.”

He is worried that a release of oil – a blowout at the well or a tanker accident – would be nearly impossible to deal with given the remoteness of the area, the distance to ports from proposed drilling areas, the lack of infrastructure and the vast expanses of sea ice.

“It’s covered with ice most of the year, which would be a huge obstacle,” he said.

Shell said it has assembled the necessary ships and equipment to deal with any accident. Slaiby also pointed out that “Shell and others have successfully drilled over 35 wells in the Alaska offshore without incident.”

Huntington and Springer also cited potential problems from noise pollution from passing ships, drilling equipment and airplanes, among other things that would be introduced to the seas. For instance, they said drilling would almost certainly change the migration paths of beluga whales, an endangered species, and potentially push them farther away from fishermen (there is an exemption for natives to hunt for subsistence reasons) who are constrained by geography.

Shell has received many of the permits needed to drill this summer but pending lawsuits by environmental groups prevent them from starting to dig.