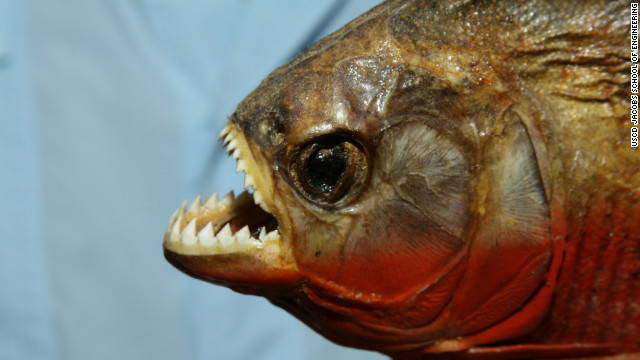 Despite the piranha's sharp teeth, it can't break through the scales of the arapaima.
February 13th, 2012
11:12 AM ET

A huge fish that is impervious to piranha attacks could become the inspiration for a new class of ultratough composite materials.

Its scales are so tough that piranha teeth crack when they chomp down onto them. Each scale is coated with a rock-hard mineral material, but they have soft cores made from strings of stretchy protein. The fish is called the arapaima, and it's native to Brazil. 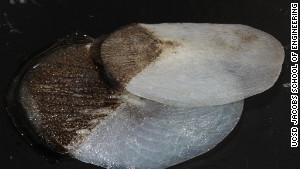 “You often find this in nature, where you have something hard on the outside, but it rides on something softer that gives it toughness,”  Marc Meyers, a professor at the University of California, San Diego, said in a statement.

Meyers and his colleagues hope that other researchers will be inspired to make materials that mimic the design of the arapaima's scales. Such materials could be used to make better body armor for soldiers or sturdier prostheses.

Using electron microscopes, X-rays and infrared scanners, the team of engineers learned everything that they could about the super-sturdy scales. They found that the stiff outer layer has tiny corrugations and it most likely belongs to a bone-like class of minerals called hydroxyapatite. They also observed that the squishy core of each scale is made from threads of a protein called collagen, and those threads are stacked on top of each other in a crisscross pattern.

In addition to their battery of chemical tests, Meyers and his team clamped piranha teeth and fish scales into a machine that tests the sturdiness of materials. The machine slowly but firmly pressed the tooth against the scale. Although the tip of the tooth did some damage to the scale, the tooth eventually snapped and the scale remained mostly intact.

Meyers was inspired to study the exotic fish while taking a trek through the Amazon Basin.

The engineers published a report about the fish scales in the journal Advanced Biomaterials.