We all have a crazy neighbor, whether we realize it or not.

Sound familiar? This hot-headed, fiery personality is one of the biggest kids on the block - huge in fact. This kid is a little unstable, with a history of doing things that are hard to figure out. And what a clothes-horse this one is - all wrapped up in amazing colors. Oh yeah, and there's a little irritating sibling who comes around every so often.

Our "neighbor" is a star about 120 times bigger than our sun and lives relatively nearby - about 7,500 light years away. It goes by the name Eta Carinae. It's possibly the most studied object outside our own solar system.

Mainly Eta is famous for its mysterious temper tantrum of astronomical proportions that rocked the galaxy back in the 1840s. The tantrum, dubbed the Great Eruption, ignited Eta for just a few years to become among the brightest stars in the night sky  before it drastically faded, all for reasons unknown.

END_OF_DOCUMENT_TOKEN_TO_BE_REPLACED 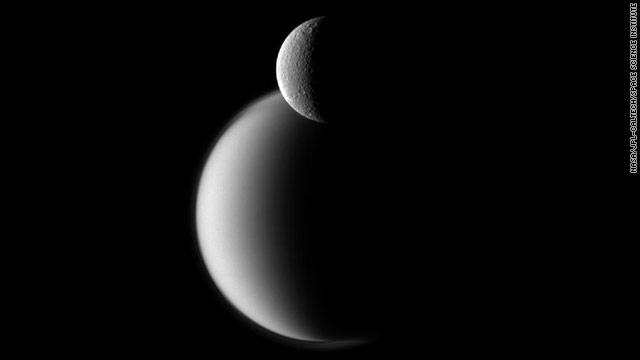 "Craters appear well defined on icy Rhea in front of the hazy orb of the much larger moon Titan in this Cassini spacecraft view of these two Saturn moons.

Lit terrain seen here is on the leading hemispheres of Rhea and Titan. North on the moons is up and rotated 13 degrees to the left. The limb, or edge of the visible disk, of Rhea is slightly overexposed in this view.

Mr. Big does not look happy having his image immortalized on film.

But it's all a pose.

The photograph above shows an African lion strutting his stuff, doing what big cats do when confronted by a stranger. The resident of the Omaha Zoo charges and growls.

The man behind the picture is Joel Sartore, an experienced Nebraska-based freelance photographer with National Geographic magazine who is on a personal quest to document as many animal species on film as possible, before some disappear forever. He has launched the Biodiversity Project, a largely self-funded mission that has taken him around the world.

The author of "RARE: Portraits of America's Endangered Species" has been blogging about his efforts and displaying some of his unique work on his website and National Geographic's Field Test blog. Prints of his work can be purchased at his website.

CNN spoke recently with Sartore, just before he headed out on another assignment.

CNN: Why did you launch the Biodiversity Project?

Sartore: This project basically looks at any animal I can put on a black and white background that will hold still long enough to get a picture of. The point is to get people to look these creatures in the eye and see if they care. Do we care that we're losing half of all the world's species by the turn of the next century? We better care, because what happens to them will eventually happen to us. It's folly to think that we can drive every other species on the planet to extinction and it won't affect us somehow.
END_OF_DOCUMENT_TOKEN_TO_BE_REPLACED