If you're concerned about the ethics of livestock production but don't want to become a vegetarian, consider this: It may be possible to grow meat in a petri dish.

Dr. Mark Post, professor of vascular physiology at the University of Maastricht in the Netherlands, is working on creating meat from bovine stem cells. And he's planning to unveil a burger created this way in October, he said Sunday at the annual meeting of the American Association for the Advancement of Science in Vancouver.

END_OF_DOCUMENT_TOKEN_TO_BE_REPLACED 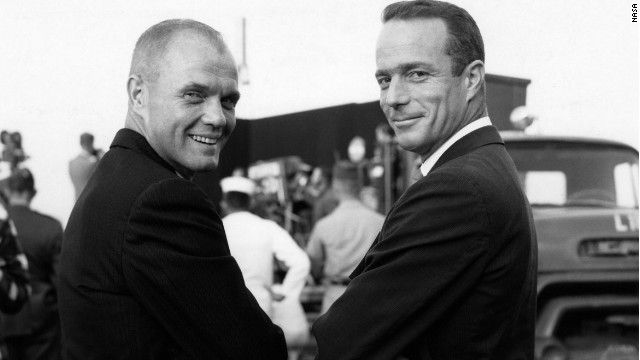 CNN chats with Glenn and Carpenter 50 years after historic orbit

“It seems like it was two weeks ago,” former Sen. John Glenn told me. Glenn and I stood a few feet from a buffet table in a reception room at Florida's Kennedy Space Center.

It was about 30 minutes before the start of a NASA celebration marking his and Scott Carpenter’s historic first U.S. orbital flights.

“Hardly a day goes by, Glenn said, “that someone doesn’t ask me about it.”

For me, this was an amazing moment.

There we were on Saturday night, just the two of us. John Glenn, who 50 years ago today became the first American to sit alone atop a 125-ton rocket and shoot around the world three times at more than 17,000 miles an hour.

Glenn's mission made him a national hero who eventually left NASA and later served four terms as a U.S. senator from Ohio.

But he couldn't stay away. Fourteen years ago, at age 77, he returned to orbit - on a much heralded shuttle mission aboard Discovery that put him in the history books again as the oldest person to travel to space.

Of course, the shuttle program is over, which Glenn told me he’s not happy about.

I asked Glenn what was going through his head while he sat in that Mercury capsule waiting to lift off. It seemed like the whole world was talking about the race with Moscow to dominate space and rising Cold War tensions.

No, he said. He didn't feel any pressure from the space race or the Cold War. The Soviet Union had already orbited a man around the world, Glenn told me.

He was absorbed in the task at hand.

“You just wanted to do the best job you could do,” he said.

There was no time then to think about the bigger picture.

Carpenter - who was Glenn’s back-up for the flight - sat in Mission Control on that day 50 years ago. Three months later, Carpenter would become the second American to orbit the Earth.

In fact, it was Carpenter who uttered those famous words as Glenn lifted off: “Godspeed, John Glenn.”

I asked Carpenter, who was now sitting just a few feet away from where Glenn and I had been chatting, if he'd thought about those words beforehand.

“I never thought about it,” Carpenter told me.  “What John needed that no American had before was speed."  The previous Mercury flights - piloted by Alan Shepard and Gus Grissom - had been suborbital.  They didn’t need the velocity Glenn needed to make it to orbit.

What I didn’t know was that Glenn was on a different communications channel when Carpenter said those historic words.

But 36 years later aboard Discovery, Carpenter was back in Mission Control and said it again, “Godspeed, John Glenn.”  That time Glenn says he heard it in real time.

Carpenter, a Navy man, has a love for outer space and inner space.

When he left NASA, he explored underwater adventures as an aquanaut in the Navy’s Man in the Sea Project - at one point living and working on the ocean floor for 30 days straight. Later Carpenter served as director of the Navy’s Aquanaut Operations.

“I still can’t make up my mind whether I like outer or inner space better,” he said - adding with a smile, “But there’s a difference in glory.”

Watch Glenn and Carpenter answer questions about their historic missions

It was now time for us to leave the reception room and head to the Visitor Complex Rocket Garden.

There - alongside magnificent museum displays of the NASA rockets that conquered space –upward of a thousand people awaited their chance to honor these men.

The two heroes rode to greet the awaiting crowd in a parade of Corvettes, the road chariots of choice for 1960s astronauts.

It was a fitting nod to those fabled times at Cocoa Beach, Florida, when extraordinary men such as Carpenter and Glenn paved the way for human space exploration.