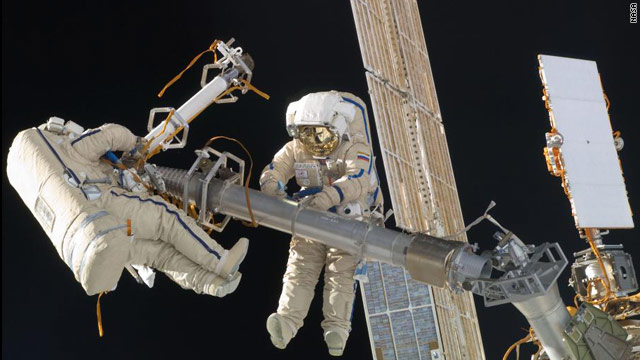 "This image of Russian cosmonauts Oleg Kononenko and Anton Shkaplerov, both Expedition 30 flight engineers, was taken during a spacewalk on Thursday, Feb. 16, 2012. During the six-hour, 15-minute spacewalk, Kononenko and Shkaplerov moved the Strela-1 crane from the Pirs Docking Compartment in preparation for replacing it in 2012 with a new laboratory and docking module. The duo used another boom, the Strela-2, to move the hand-operated crane to the Poisk module for future assembly and maintenance work. Both telescoping booms extend like fishing rods and are used to move massive components outside the station. On the exterior of the Poisk Mini-Research Module 2, they also installed the Vinoslivost Materials Sample Experiment, which will investigate the influence of space on the mechanical properties of the materials. The spacewalkers also collected a test sample from underneath the insulation on the Zvezda Service Module to search for any signs of living organisms. Both spacewalkers wore Russian Orlan spacesuits bearing blue stripes and equipped with NASA helmet cameras."