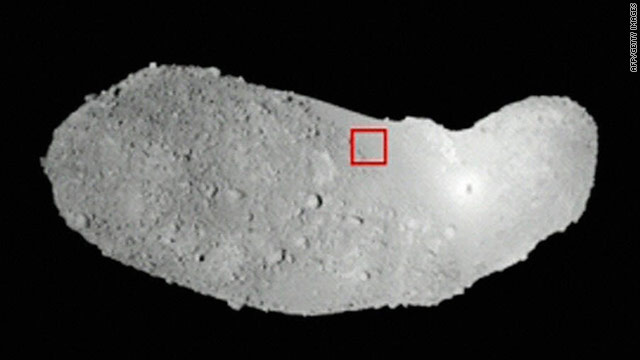 Did you know that Japan has a space agency? They do, and JAXA (the Japanese Aerospace Exploration Agency) is doing some cool science with miniscule asteroid grains.

A team of Japanese scientists took a look at five tiny grains of the asteroid 25143 Itokawa and found evidence to support theories of "space weathering," that is, the changes in an asteroid's surface brought on by a continuous assault by micrometorites and solar wind.

In order for scientists to study these grains, which are merely nanometers in size, they first had to come down to Earth, and not by entering our atmosphere as meteorites. Meteorites, while material from asteroids, are assumed to have lost their surface material on entry into our planet's atmosphere. JAXA's Hayabusa spacecraft literally sent home bits of the near-Earth asteroid 25143 Itokawa for scientists to study in a capsule, which came home on June 13, 2010.

This is the first potentially space-weathered material, other than the Apollo moon rocks, available for hands-on study and observation. Previous studies of space weathering and asteroids have been conducted using spectroscopy - the study of light radiated from an object.

The five grains studied by the Japanese team indicate that space weathering isn't a single phenomenon, but should instead be understood as the effect of a combination of processes affecting the asteroid's surface.

These samples, and the study overall of space weathering, is key to understanding the formation of the solar system.

Their findings appear in the journal Proceedings of the National Academy of Sciences.